After the critically acclaimed debut last week of X of Swords, Leigh Williams has the unenviable task of following in the footsteps of the so-called master himself, Jonathan Hickman. And yes, I wrote that with tongue firmly in cheek. So, will we have the anticipated let down, or will Leigh Williams shock us all, and prove she’s worthy of the mantle of ongoing X book scribe?? Let’s find out in this SPOILER-FREE review!

I was extremely apprehensive about this issue going in. I haven’t particularly liked the first three issues of X-Factor much at all. Then to have issue four be part two of a twenty-two issue event made little to no sense to me. I mean just writing that makes my head hurt. The only thing that makes even any sense to me is that the schedule got scrambled due to COVID and the shutdown. We didn’t even get an ending to the murder/mystery on Mojoworld before being thrown into X of Swords. And trust me when I tell you, this is not a throwaway tie in by any means as we’ve seen so many times in the past with events.

This is an absolute must-buy if you’re reading X of Swords. It addresses my biggest gripe since HOX/POX began, builds upon it, and sets up seemingly endless plot threads. My biggest gripe? Up to this point, the completely meaningless deaths. With resurrection what’s the big deal?? Seriously? Kid Omega has died at least three times already. It’s literally been a joke even in the X books themselves. 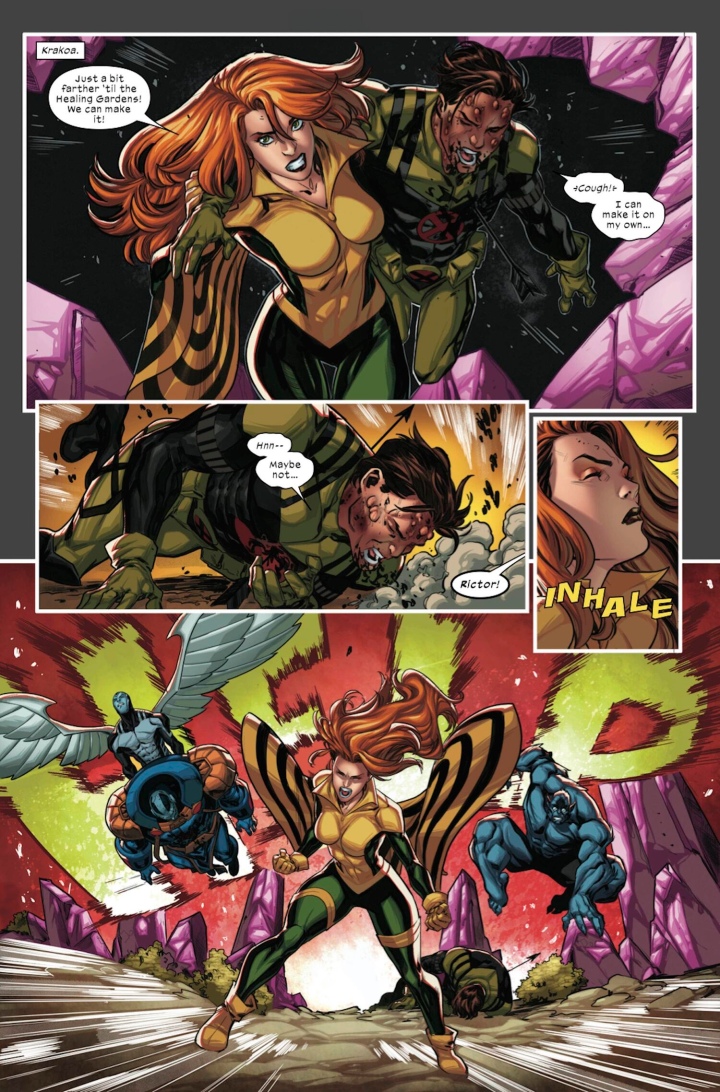 Right of the bat, the absolutely stunning art is on full display! It’s top-notch and certainly adds to the magnitude and massive scope of this event.

We get more so-called character work on the relationship between Rictor and Apocalypse. And while I appreciate going further in-depth with the aforementioned characters, Polaris steals the show in this issue. What happened to Rockslide, how she reacts to it, and handles it is central to this issue. However, be warned. There are lots and lots of words. An unbelievable six full pages of data dumps. SIX!! I realize this is an oversized issue, but that’s a lot. But…..for the most part, the data dumps are integral to the story. There are some that seem to be a bit of nonsense, but I’m hoping they’ll make sense later once we get more into the story. Two of my favorite characters are mentioned and included in the data dumps so I greatly look forward to seeing what part they’ll play in the upcoming issues. Those being Doug Ramsey and Warlock!

In the reviews I’ve done, I’ve not scored any books Leigh has written very highly, but she sure has changed my mind. She has proved she belongs as much more than a “secondary” X book title writer. At least in my opinion. Now I will expect this level of writing going forward! Seriously. This is a fabulous issue. I actually liked it better than Creation. My hope going forward is that she can finish up the Mojoworld arc and get after it in the fashion she’s shown in this X of Swords issue. In the span of one issue, I’ve gone from dreading to read X-Factor to having it be a must-read. I literally was in suspense and couldn’t wait to see what happened on the next page.

This X of Swords event is off to a stellar start. I can’t wait to see what happens next!

Leigh Williams has upped her game and written what will be a massive game-changer in the lives of mutants going forward. Actions now have actual meaningful and lasting consequences. And Leigh has also cemented in my mind what many already think. That being, who the biggest threat to mutants really is…