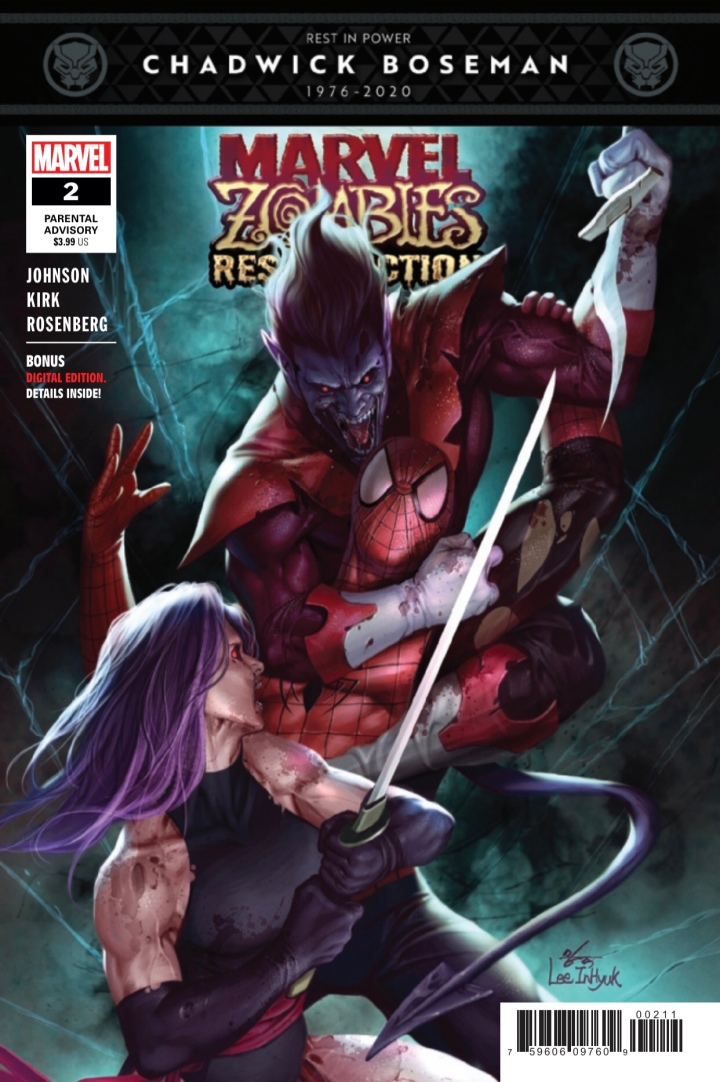 After the inevitable cliffhanger of Blade showing up to kill the undead, will issue two of Zombies Resurrection hold the line, or will it suffer issue two fall off? But really this IS issue three of the series, right?!? Let’s see where Spidey and company are in their pursuit of the Galactus hive!

We open issue two with Peter in somewhat of a dire situation. That is Peter in the Spidey suit right? Looks very strange still to me. Either the art is wonky or Pete had a skin graft over one of his eyes. Could be from an attack, but he’d be a zombie then right??

Peter is suffering from nightmares still. Or are they a glimpse of the future?

We then however quickly get down to business with Blade and Pete explaining to him at great length what his personal mission is…..to protect Franklin and Valeria.

We then unfortunately fall into extended periods of excessive wordiness. All while riding aboard a battle-damaged Sentinel. I did find that part slightly amusing. We get the backstory from Blade on the history of this AU and why things are looking quite bad for the human race. It serves its purpose I guess but in an incredibly boring fashion. I was checking the page count very early on this issue. Ugh…

We do get introduced to some more AU versions of Marvel characters that are quite unlike their 616 own selves. Why they are the way they are is explained and it shows to what length humans are willing to go to not be turned into a zombie. This part of the book was somewhat more interesting, but again rather boring.

Eventually, a plan is made and set in motion as the cliffhanger of the issue. I really like where the mission is headed and the last page of the book was in fact my favorite page.

The art seems hurried, muddled, and not defined. Peter still doesn’t look like Peter to me. Just a haggard homeless man honestly. I’m not sure why this would seem so hurried with the extended period between issue one and issue one. That’s not a typo BTW. And no, I’m not letting the mis-numbering fiasco go.

I’m really hoping the next issue is more in line with either of the issue number one’s. Issue number two was a big let down to this reviewer.

While we did get some progression to the story, it was done in a very boring way. The art also seemed hurried. If issue three isn’t a marked improvement, I’m out!