After receiving a new costume and then becoming sick, Jessica is on a quest to find out the reasons behind her sickness. The answers she finds lead her down a trail that she is somewhat surprised by. Unfortunately for this reviewer, it’s a trail I’ve seen traveled many a time in many different genres of entertainment. Let’s take a look at Jessica’s second issue of her new ongoing!!

I’m SO torn on this issue. I want to like it so much, but it leaves me pretty frustrated by the end. Let me tell you why.

Jessica Drew has been one of my favorite characters since I first read New Avengers and her mini-series both written by Brian Michael Bendis. While Bendis has become quite popular to be critical of, he sure was on his A-game when writing Jess! I was very excited to see a new Spider-Woman series announced, and while issue one was not bad by any means, it left me wanting more. Jess is a great person. She’s a hero and a mother. Unfortunately being a mother, hero, and great person leads her to fall into some seriously cliched plotlines in issue two.

Karla Pacheco puts in some longtime Marvel heroes to start things off in a flashback. And while it actually makes sense having Night Nurse in this issue, having Rhino in it makes really no sense to me, other than to just fill up a couple of pages, or possibly make a joke filled with innuendo. Either way, it doesn’t seem necessary to me. 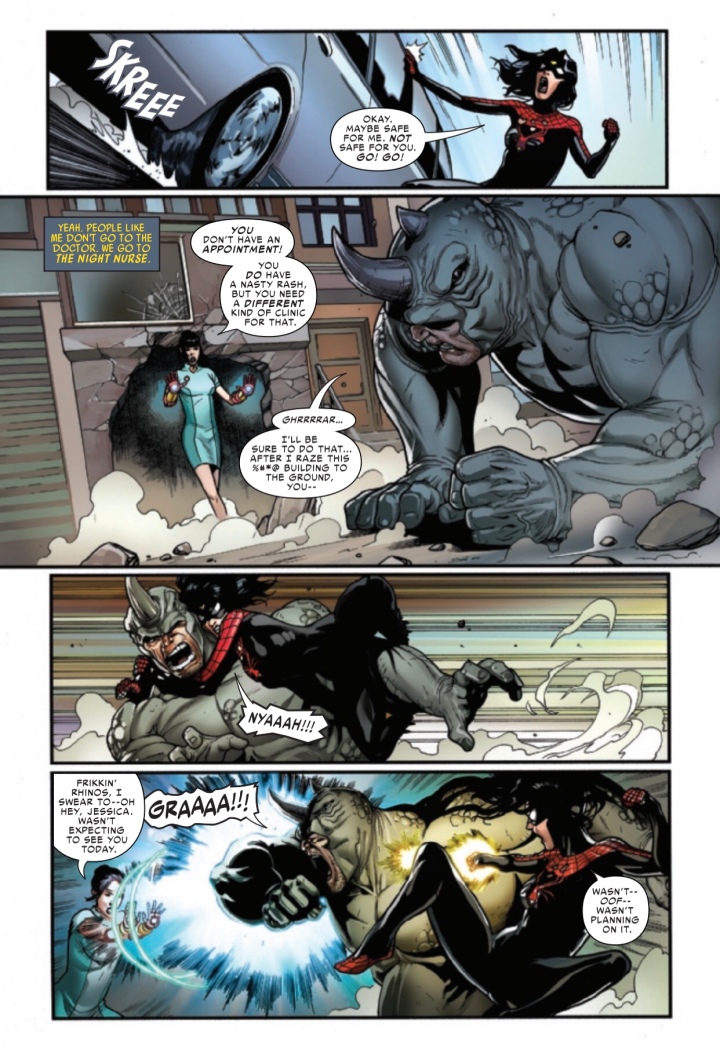 We finally get to the actual story with Night Nurse and Jess and they try to get to the bottom of Jess’s sickness while also mentioning her new costume.

Basically, Jess has become sick at the hands of Michael Marchand, who hired her to protect his daughter, Rebecca. We find Rebecca is ill and to try and save her, Michael has gone to any means necessary to do so. That’s where our story really gets going. How it involves Jess and the daughter of one of her long time foes, Otto Vermis, is told in a flashback and a pretty nice fight scene. So now Jess is sick, Rebecca is sick, and Jess’s son may become sick. Jess has to resort to a life of crime so to speak to save everyone. That’s my main problem with this issue. It’s the cliche of many stories, books, movies, etc…. parents doing whatever they have to, to save their kids. And it always works and everyone goes home happy.

So, my frustration is that in an effort to complete a new trade paperback, I’m going to have to read several more issues of a story I already know the ending to. Jess WILL in fact save Rebecca, her son, and herself. Period. That’s how these things roll. I mean, it’d certainly be a huge plot twist if Jess’s child would die if she weren’t able to save the day, but we know that won’t happen. So why bother really?? At least my hope is that the road to saving everyone becomes more interesting and less predictable. It’s the reason I hate almost all sports movies. And I LOVE sports!! The good guys almost always win. That’s why my favorite sports movie is Rocky 1 because he loses!!! It’s about the journey there, the trials and tribulations. Rocky didn’t quite make it and he lost! Losing is ok!!

I also need to talk about the new suit. I’m not a fan. The black costume just doesn’t work for me. Between the inking and the colors, or lack thereof, it’s muddy, dark, and drab. Not sure why the choice was made to go away from Jessica’s classic costume, other than to just make a change for changes sake. That classic costume can be seen in this Mike Hawthorne villain variant in all its glory.

It doesn’t make sense why the villain variant wouldn’t use the same Silver Age Spidey villain that’s in the issue though. I’ve never understood the reasoning behind choices of covers that have absolutely nothing to do with the story. Marvel is literally paying someone to draw a fabulous cover that has nothing to do with the story. At all. People will buy it for the classic costume though!!

While I’m thrilled there’s a new Spider-Woman series, perhaps my expectations were set too high. This book isn’t terrible by any means but I want it to be great!! My hope is that after we get some stability with release schedules and Karla settles in, that this book will find it’s groove.