So far in three issues Jessica Drew has had her share of shocking news. First, she finds out she has a brother, then her thought to be dead mother is apparently alive, and now she’s also back at Wundagore Mountain!! Whew, that’s a lot. So, are we in for more shockers in issue number four??!! I think we all know the answer to that!! Let’s see what craziness Karla Pacheco has in mind for us this month!!

Well right off the bat Karla Pacheco gets high marks for using a full page to get newer readers, or readers not familiar with Miriam Drew up to speed. It really helps me feel more invested in the overall story as well as the characters if I know more about them. Lack of recap, especially when we’re dealing with things that happened years ago has long been a sore spot for this reviewer.

We then quickly jump to the present, as Miriam gives more of the families rather unique and hard to believe back story. After several pages of this I feel bad for Jess. Really bad. We also get the use of an editor’s note that I also really appreciate. Again, these are great resources for new readers. And besides that, it references a really good mini-series from 2005. Check it out. Great writing and art! 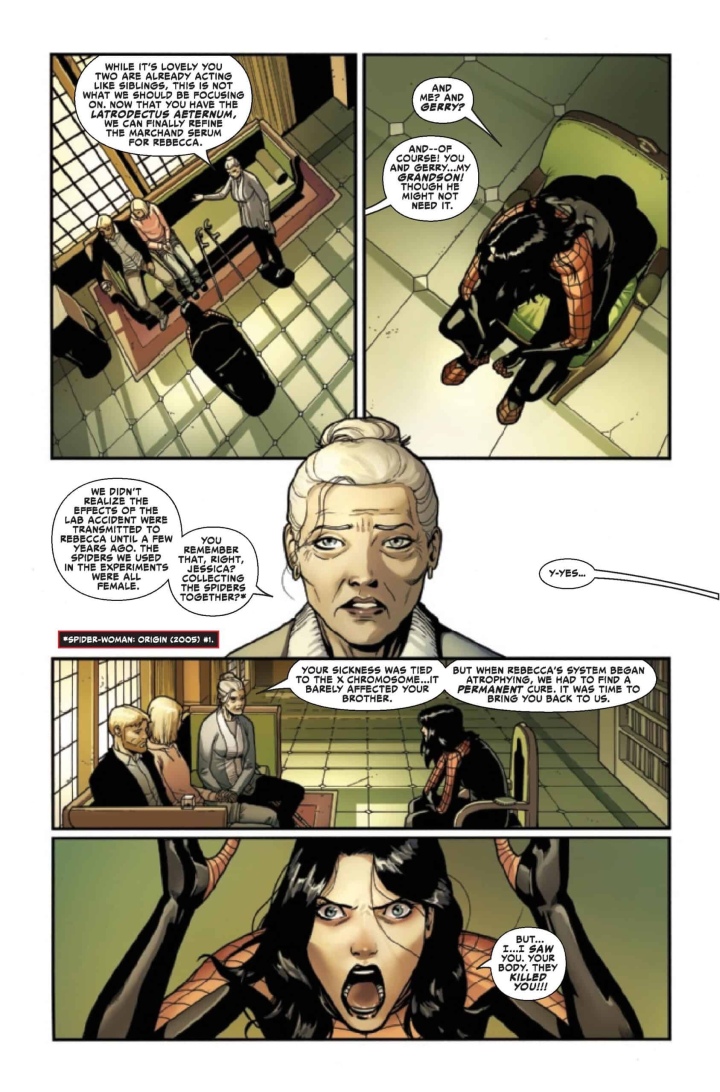 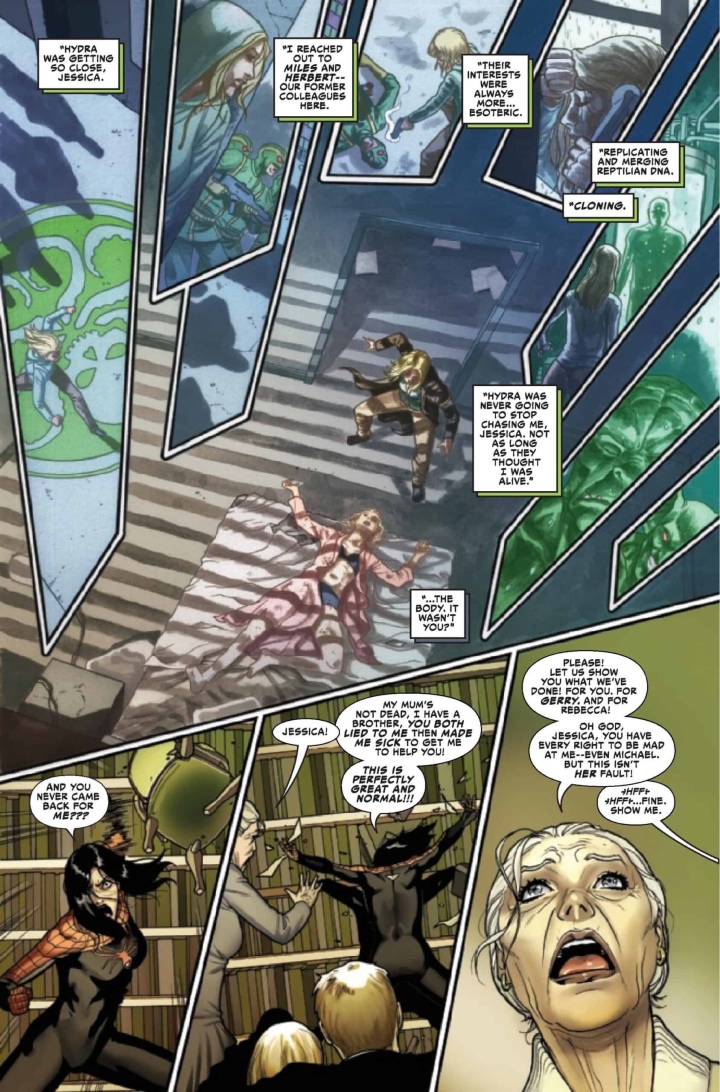 Jess feels used, abandoned, spied on, taken advantage of, and I don’t blame her one bit. She even starts ripping her brand new costume off.

I’m all for that! I’m not a fan of the new costume. At all. I know it’s purely my opinion, but it’s too dark. The reason Jess’s classic costume keeps popping up on countless variants is that it’s perfect! Timeless! Interesting that Jess is sporting the classic costume in the current issues of The Amazing Spider-Man. Makes me wonder if anyone at the Spider office at Marvel ever talks to each other. But that’s a conversation for another day.

So, up to this point, things are going great right? Yeah, I thought so too. Like I’m getting everything I want in a comic. Seriously! Recap, references, backstory. Actual progression to the story. But alas, as soon as we get a Linda Hamilton mention I know the wonkiness is soon to follow!! Actually, if anyone even knows who Linda Hamilton is without googling her, they’d know what to expect too! An action movie from the mid-1980s!!! And while it’s a bit far fetched for me, it works ok. It’s a comic book for God’s sake. It’s ok to have explosions and the like. Right??

Pere Perez deserves some mention too! His use of shadows and bullet effects make for some spectacular visual effects that really add to the issue. The colors are a bit too dark for me though, at least for Spider-Woman.

We end with a great full page of art and effects but Jess’s face looks a bit off. Like she’s a zombie. Too grey/gaunt for me, but it works as a nice cliffhanger nonetheless!

This book continues to be a wild ride and has stayed true to itself thus far, and I’m totally fine with that. I love the recaps/editors notes that Karla uses. It adds depth to the story. And after this month’s cliffhanger, I’m really curious to see what Karla has up her sleeve in issue 5!