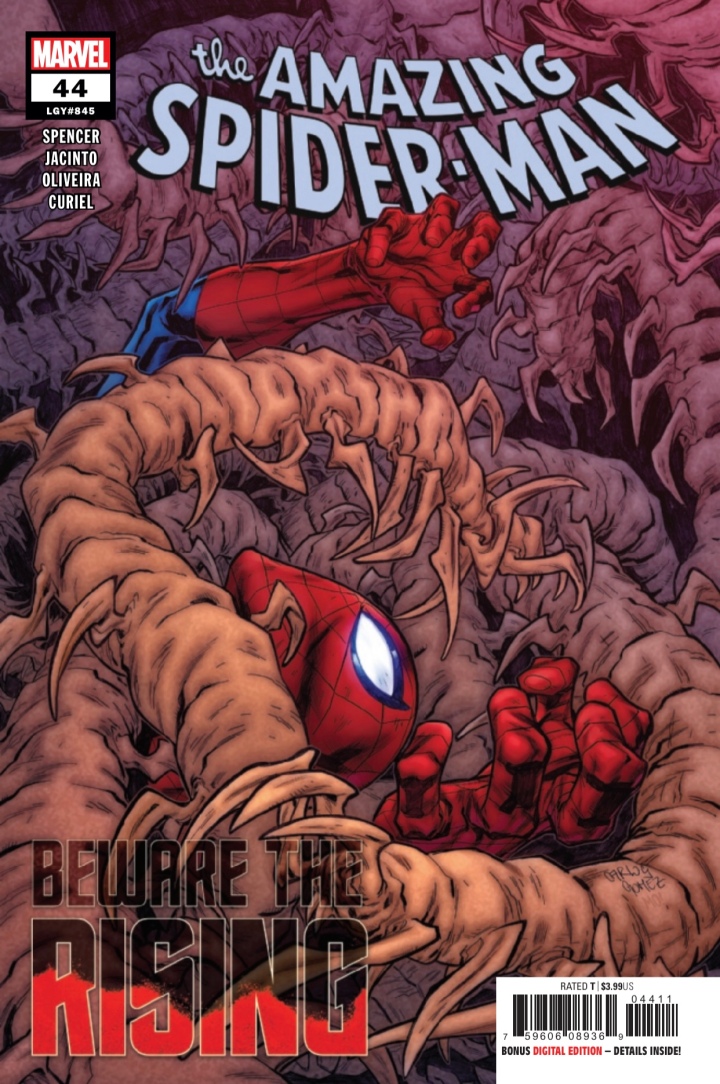 Nick Spencer’s Amazing Spider-Man has provided readers with a series of different ongoing plots and long-term stories, with one in particular being perhaps the one readers have the most investment in. Who is Kindred? Even this late in the run, we still have very little to go on, and this issue, bringing Kindred back into the plot, isn’t going to add any more hints to the mystery. SPOILERS AHEAD

Here, Peter is dreaming about an encounter with the villain Overdrive. Peter learns that Overdrive had been a getaway driver for the Inner Demons, and after a successful heist, the gang is approached by the Sin-Eater, who boasts eerie powers. The Sin-Eater makes quick work of the Demons and Overdrive escapes, but is relentlessly pursued by the Sin-Eater for days; inexplicably, no matter how far Overdrive manages to get, the Sin-Eater is right on his tail.

Spidey finds himself in the backseat of one of Overdrives pimped-out getaway cars as Overdrive bares everything to him. Even though all of this is a dream, its also happening…or has happened…in actuality. Peter, back at his apartment, wakes up alone and rattled, and decides to call up Mary Jane, leaving her a long voice mail, recounting on what’s he’s been through and confessing how much he needs her. She gives him a reason to want to be Peter, instead of driving himself to only being Spider-Man.

Its at this point we have Kindred appear, revealing that Peter is still dreaming. His appearance is as menacing as ever, given his lingering status as being a potential big bad who has been lurking in the background, occasionally giving Peter hints of his presence. Kindred has been a looming threat since the very beginning of Nick Spencer’s run, and his true motivations, his identity, even his powerset has still not come to light, not only to Peter but also to us readers. Its been a long-game wait to finally see, and I’ve personally suspected this payoff was being preserved for the inevitable 50th issue of this run.

The story here is one that brings Peter’s attention to the revived Sin-Eater, a classic foe that Kindred had resurrected several issues ago. Spencer continues to taunt us with his mystery baddie, without sharing with us anything new we may use to get a better idea of who he is. Pretty much, what we’ve known of Kindred up until this point hasn’t changed, and nothing new has been added. Its still all a promise to something “big” and “life-changing”, staying just as vague as ever. The art is great and the style works, given the feel of the story. No, we aren’t working with a brighter, fun, friendly neighborhood story here. Its a moodier tale with that Kim Jacinto captures fairly well. It’s a passable package, but don’t be surprised that this mystery still isn’t playing fair.

I have this feeling of this being the beginning of us gearing up towards all the revelations we’ve been waiting for. It feels like there’s nowhere left to go with the character of Kindred. Spencer’s has now hit a wall with new ways to tease this character at us. There’s nothing left, short of finally getting on with it. And yet, somehow I also wonder if this arc is just another obstacle for us readers to venture over, only to find that the answers are still nowhere in sight…

Spencer continues to bait Kindred like a carrot on a stick. The well for hyping his villain is running dry, and we can only hope the days of teasing us with his cryptic appearances are coming to a close. Beyond Kindred, we are treated to the Sin-Eater arc we’ve been seeing brewing in previous issues as back-up material. It’s not a bad issue, just a non-special beginning of another arc.