WOLVERINE’S investigation of a robbery committed by some mercenaries directed him to Legacy House. What’s that you ask? Well, it’s a secret underground auction house that specializes in rare superhero artifacts including the severed arm of one WOLVERINE. However, while “Patch” decided to infiltrate this underground Black Market party, Logan found himself face to face with MAVERICK who was also being sold to the highest bidder. Luckily, Logan was able to break through MAVERICK’S brainwashing just in time for a Team X reunion. Let’s jump into WOLVERINE #10 by Ben Percy to see if this reunion is just like old times or if there’s more than meets the eye scratching at the surface of this rekindled relationship.

It sure was great to see these two back to back again (literally). Percy throws out the “good ol’ days” feeling throughout the entire issue and leaves readers wanting more. The chemistry between WOLVERINE and MAVERICK was present making this issue a stellar team-up. Moreover, Percy continues the premise by unfolding deeper roots and exploring new interesting aspects of both MAVERICK as well as Special Agent Ramirez. Percy has certainly piqued my interests in the X-Desk making this reader curious as to what Ramirez is working on under the exterior. What’s her hidden agenda? However, as we see by the end of the issue, what’s MAVERICK up to as well?

Overall, the story wasn’t that bad. That said, there was simply a handful of components that I wish we learned a bit more about. For example, readers will not find any answers as to how WOLVERINE’S limb was recovered at the auction. Likewise, I felt like there were gaps in the MAVERICK plot. For instance, it appeared as though he was mindwiped. But, who mindwiped him and how did he get there?

My assumption is the Black Market auction company must have done it… somehow. But, how did it happen, and with what device and purpose? Was MAVERICK trying to infiltrate their storage area but somehow got caught? And if so, why was the second trip with WOLVERINE so easy but not the first? Moreover, why couldn’t readers see inside some of those boxes at the storage facility before they were destroyed? That seemed like the perfect opportunity for Easter Eggs and possible future stories down the road that have been wiped out. Mainly, I was disappointed to see this story end the way it did. 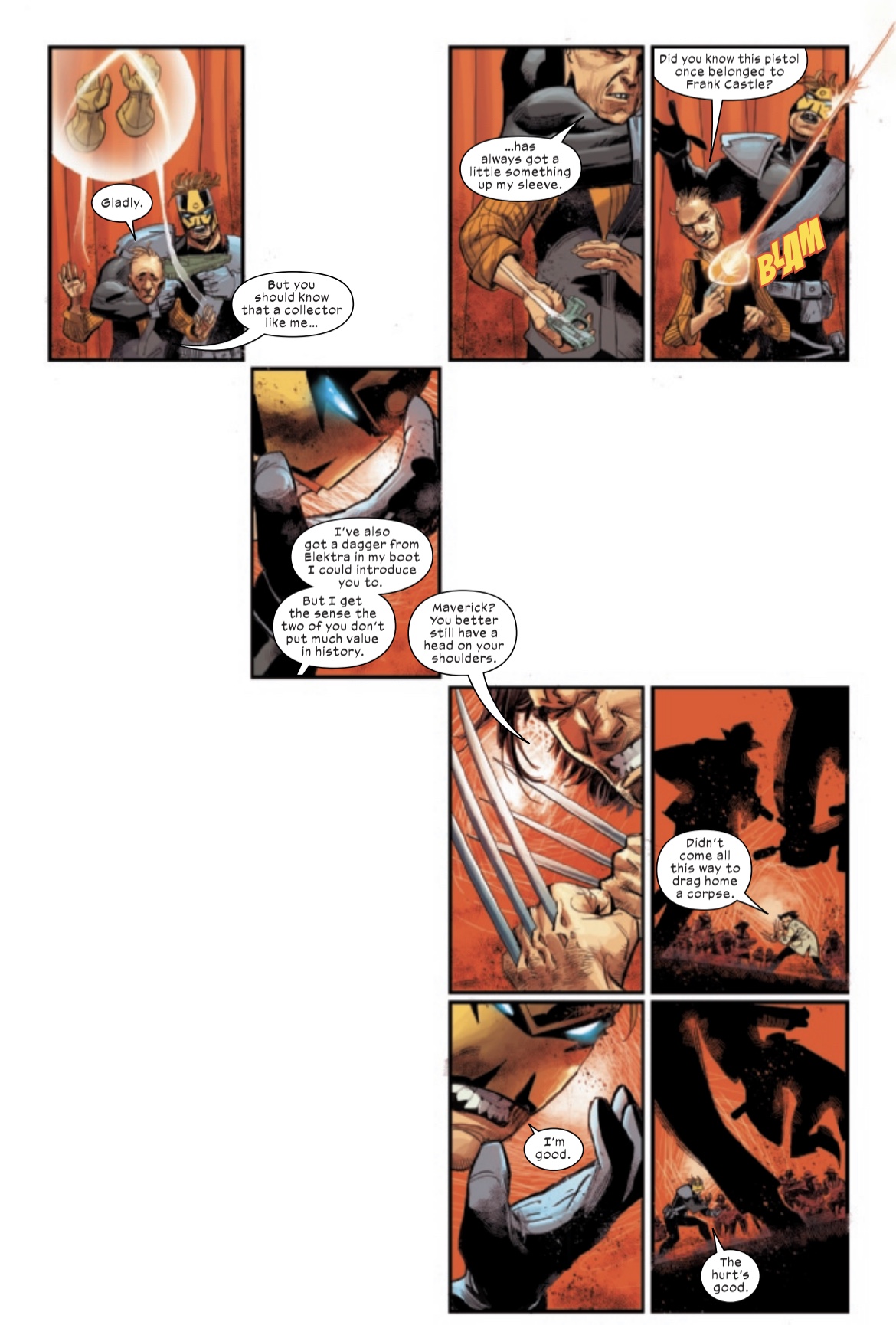 Truthfully, Adam Kubert has done so much better. Look no further than this very series as proof. Nevertheless, the small panels didn’t do him justice. Kubert’s bread and butter are when he has space to work. My goodness, just look at the cover. Big, bold, and vibrant. However, Kubert tried to show movement, action, and progression with small panels that lacked a ton of detail. I understand the intended to show how largely outnumbered WOLVERINE and MAVERICK were. Nonetheless, it came at the expense of the comic. I’d rather larger panels without the scope and size of the fight.

Moreover, some of the pages, especially in the beginning, were left with open white spaces to add a sense of confusion to mimic MAVERICK’S mind wipe. I get it… but again it comes at the cost of the issue. I shouldn’t have to squint or zoom in on my tablet to see what’s going on with the main characters. Now, once the two besties made it outside, Kubert opens up the panels again showcasing what he can do. However, he still manages to sprinkle in too many smaller panels in an attempt to add variety to the page and spice up the movement in the issue. Again, I get it but that’s not a good fit for his style. I hope that he opens things back up in future issues.

I left WOLVERINE #9 excited, full of questions, interested in the direction Percy was heading, and pumped for an epic team-up. Now, it’s not that Percy didn’t answer some of my questions… because he did. However, the answers just weren’t as exciting as I anticipated, which is on me… I get it. But, I’m the one reviewing it. Furthermore, the team-up wasn’t as powerful as it could have been due to Kubert’s illustrations this week, which were again out of character for him. Percy delivered the opportunity but smaller and less detailed panels led this reader to muddle through the issue a bit underwhelmed. Readers, it wasn’t bad by any stretch. Nevertheless, it wasn’t what it could have been nor as good as I’ve seen this creative team do in the past. Take a look, let me know what you think, and God Bless!

One thought on “Wolverine #10 Review”