X OF SWORDS PART 4 continues following the events from WOLVERINE #6 by Ben Percy. A new arch-nemesis was introduced to Logan and from the covers, things aren’t looking good for Wolverine. Why do I bring up the covers? Well, it’s because Marvel didn’t send out ANY preview pages of this issue, which normally means something big is set to happen. So, let’s dive into X-FORCE #13 by Ben Percy to see what’s so hush-hush that Marvel can’t share a few preview pages with their loyal fans. Was this issue truly surprising? Let’s find out! 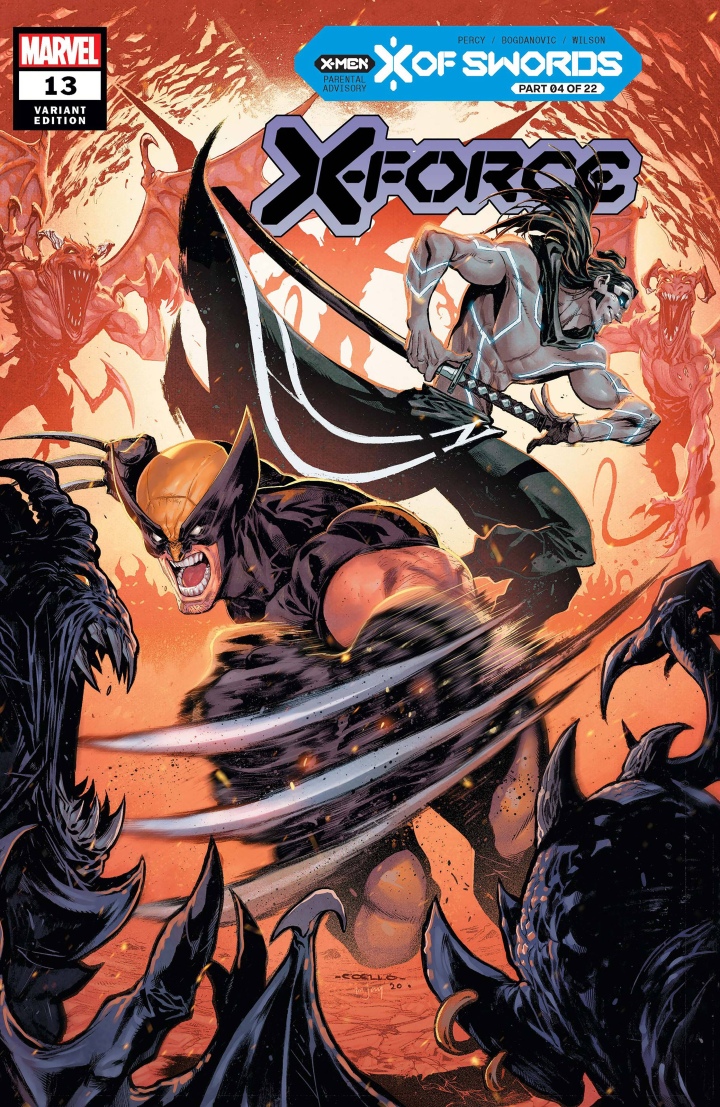 As X-FORCE #13 continues our story from WOLVERINE #6, readers find Logan, hot on the heels of the Muramasa blade. However, our dear Canadian bruiser isn’t alone. That’s right! Wolverine’s new arch-nemesis has also found a way to track down the sword as Percy leads readers on a quest for the Muramasa blade that eventually concludes at the end of this issue. However, you’ll have to read both X-FORCE #13 and WOLVERINE #6 to see what happens.

Now, Percy places the Muramasa blade dead center of his issue. Readers discover some of its traits, how it’s made, and it’s true capabilities. Additionally, before this issue of X-FORCE concludes, readers also discover a bit more about Solem, Wolverine’s new arch-nemesis. Can this reviewer just say that I think Marvel may have overblown Solem as an “arch-nemesis”? Don’t get me wrong; Solem certain seems pretty bad&@$. Plus, some of these attributes, which are further ironed out in this installment, will make him a pretty formidable adversary for WOLVERINE. Still, the two are far from hated enemies at odds with one another.

This biggest complaint about this issue was actually the color. I know that seems like an odd statement but the location of this story brought forth similar oranges, reds, and blacks that didn’t help this reader when deciphering between characters within fight scenes. It wasn’t awful by any stretch. However, many of the action-packed fight scenes within this issue became confusing as to who was fighting who. Additionally, the costume change that occurs in the issue didn’t help much either.

Overall, the action that was missing in WOLVERINE #6 was definitely blazing in X-FORCE #13. Percy utilizes his dueling x-titles to reinforce the premise of the X OF SWORDS “tournament” while introducing what the next few X-MEN titles are going to look like as readers follow their beloved heroes through their favorite titles searching for their sword in the tournament. The path is clear. The expectations are laid out. And ultimately, new readers will leave this issue loving the hell out of WOLVERINE and his new bosom buddy. Nonetheless, just like WOLVERINE #6, if you’re an X-FORCE fan that’s not really into X OF SWORDS, this title isn’t really required. You can take some time off this week if you wish and not miss the current storyline in X-FORCE. That said, I wouldn’t recommend it because this issue was fire! Percy and WOLVERINE go together like peanut butter and fluff… or like a Hell Forge and a Muramasa blade! Pick both of these Benjamin Percy X-titles up and let me know what you think.