Krakoa has become a sanctuary to all mutants from all walks of life. It’s come to be a place they can all finally call home, except for one who has yet to grace Krakoa with his presence… Franklin Richards. So, the good Professor and the Master of Magnetism concoct a plan to usher Franklin to Krakoa by means of using his relationship with one Kitty Pride from FANTASTIC FOUR VS. X-MEN #1-4 employing the premise that they would be either helping Franklin get the full extent of his powers back OR discerning if what’s happening to young Franklin “could” also emerge in other mutants. Let’s plunge into the first installment of X-MEN/ FANTASTIC FOUR #1 by Chip Zdarsky to see if the Quiet Council’s motives are genuine OR if there is a secret agenda yet to be revealed.

Chip Zdarsky kicks off X-MEN/ FANTASTIC FOUR #1 in an easy to follow, straightforward, and familiar way that catches up new and old readers alike. If you’re new to the history between the two supergroups, Zdarsky wastes no time putting all readers on a level planning field, introduces Franklin Richard to those not following the FANTASTIC FOUR, and manages to do so in a way that didn’t sacrifice too much of the issue. However, this does come at the expense of the page count and helps to commence this tale in a bit of a snail pace. This reader understands the purpose of building a comic for everyone BUT wishes it could have been done without sacrificing the page count.

Due to Zdarsky’s choice of elevating the importance of background development to the story, mixed with 4 more title pages, this issue just begins slow, not overly exciting, and didn’t grab this reader’s attention right out of the gate. It actually felt a bit flat. Again, since every comic maybe someone’s first, the setup is important to get everyone on board. However, I simply feel like it came at the cost of the issue. Couldn’t a nice, almost wordy, recap page have been enough? Sure, that wouldn’t have been as creative or flashy BUT it would have cut thirteen pages down to one or two and placed more new content at the forefront of this story. 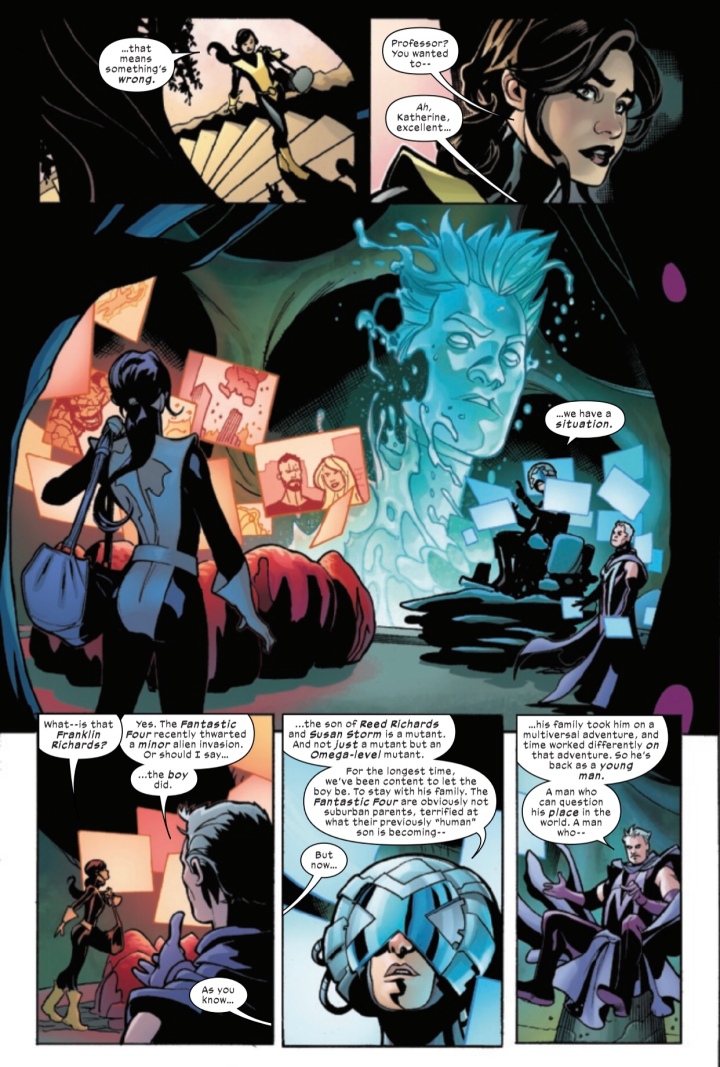 The second element that became bothersome to this reader was the issue’s predictability. To those readers that have been following along since the FANTASTIC FOUR returned, as well as HOXPOX, the aspect and motivation behind the series seemed clear before opening any pages. So, to discover that Franklin Richards is the linchpin to this series was absolutely no shock. Furthermore, the direction and twists that happened throughout the issue came as no surprise, until the last third of the issue. Sure, if you’ve only been reading DOX titles, the Franklin Richard ideas may have been less anticipated. Plus, if you haven’t been reading any DOX titles and only FANTASTIC FOUR, then not only do you need to crawl out from under your rock BUT you very well may have also needed this first issue to help set up the story. That said; for someone (Zdarsky) interviewed in October from Newsarama saying “These four issues are going to be the biggest bang for your buck in 2020.”, I’m sorry to say I’m still waiting for my bang.

Now, let’s focus on the positives of this issue. Chip is fantastic at getting every character involved. Everyone had a purpose in the issue. Everyone was used appropriately and everyone felt like they had an important role to play. Often times, writers of team books tend to focus on one or two characters and give very little for the rest of the team to do or say. That’s absolutely not the case here! Zdarsky uses all the toys he can in his toy box and does so masterfully. Furthermore, It’s obvious that Chip has done his research. Some writers simply don’t play well with others and it’s obvious to see that they aren’t reading anything but their own comics. However, Zdarsky makes multiple references to what’s been going on in all the DOX titles as well as the history involving the FANTASTIC FOUR and X-MEN. He actually incorporates so much that he weaves in elements from 1987 flawlessly and makes them feel like they just happened yesterday.

Additionally, Zdarsky’s angle makes it feel like Charles and his crew are the bad guys of this series, if not possibly in Marvel Comics right now. They’re arrogant, cocky, rude, and Chip highlights some of those cult-like feelings this reader felt while he was reading HOXPOX. Back in the Summer, Jonathan Hickman had this critic wondering if the X-Men were actually the villains of this story and I loved it! Well, Zdarsky continues to pull on that thread and I can’t get enough. I simply admire the premise that readers don’t completely know if the good Professor and his mutant militia are all actually on the up and up. This curve fascinates me so much and this reader hopes it becomes a huge focus of this event.

Now, the most interesting elements of this issue are solely related to Franklin Richards, which is the genuine focus of the narrative. As someone invested in both the FANTASTIC FOUR and X-MEN, I want to know why his powers are out of whack. I want to know if Charles can fix him or if he’s simply being used. Personally, I think Charles WILL fix him by using the resurrection protocols and giving him a new body. However, this is when $&@$ will hit the fan and the entire world will know of what the mutants are actually capable of. And if this isn’t the angle Zdarsky uses, I believe it will be something very similar in order to spark a war. Let’s face it; there is no better way to start a war with the FANTASTIC FOUR than to kill Sue’s baby… even if he does come back to life. You don’t touch a mama bears baby let alone kill it. Watch out, Charles. Don’t piss off Sue… just saying. 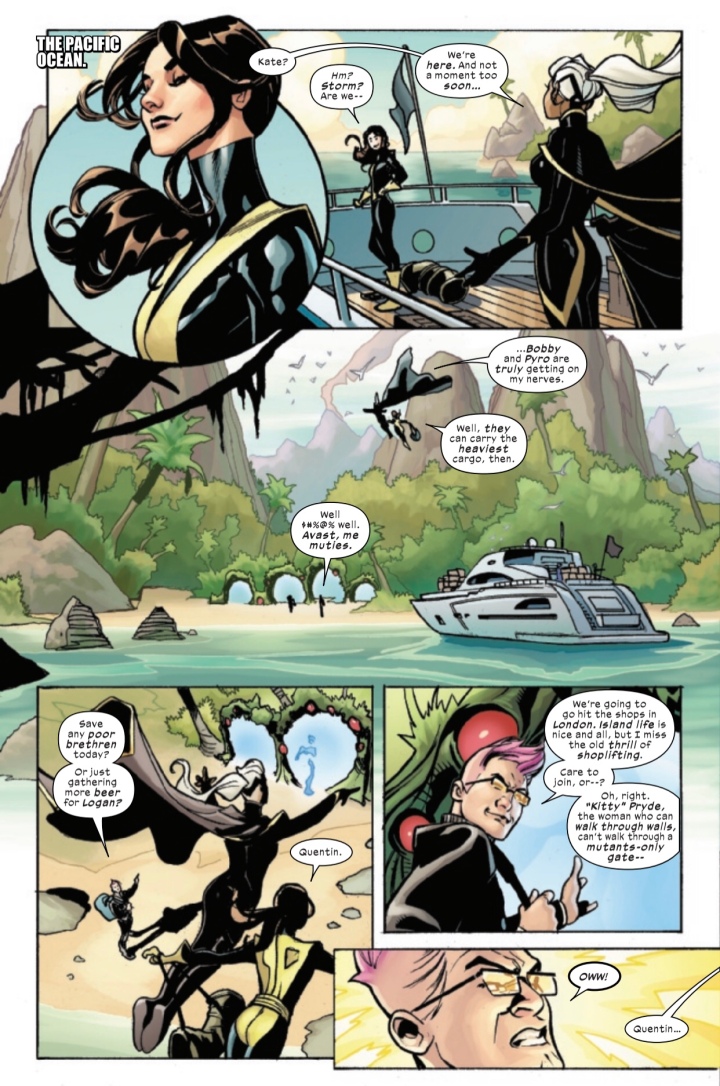 As mild and informative as issue one was, I still left the story reasonably entertained. My expectation was for more pop and sizzle from the opening tale yet I’m still excited for what’s to come. Zdarsky has more than proved to be a superior writer and I believe has ultimately used issue one as his set up for the entire event, which is fine as long as the last three issues are packed full of excitement, action, suspense, and jaw-dropping storytelling. Maybe Chip decided to get the background and set up out of the way early? If that’s the case, I’m cool with that. However, as issue one’s go, I feel it really didn’t start to take off until the final third of the issue leaving the pacing of issue one a bit slow. However, I have extremely high hopes for what’s to come and can’t wait for the next installment. If you’re a FANTASTIC FOUR fan, X-MEN fan, Zdarsky fan, or even a Hickman fan, this event is definitely for you. If you like to read the most important things happening in Marvel Comics to stay up to date and in ”the know”, this is also the comic for you. Grab issue one and add the series to your pull list. Before this series is all said and done, I think you’ll be happy you did.