Are your children normal? Are they respectful of you and other approved authority figures? Do they have a poster of the Punisher on their wall? Or are they angry and discourteous? Do they embrace difficult and/or dangerous concepts, such as protests and the environment? Do they stand with the Hulk? In this week’s all-new IMMORTAL HULK #28 by Al Ewing, has the Hulk started a youth moment? Have they joined the Teen Brigade? And, can it be stopped? Let’s smash into this week’s installment and find out! 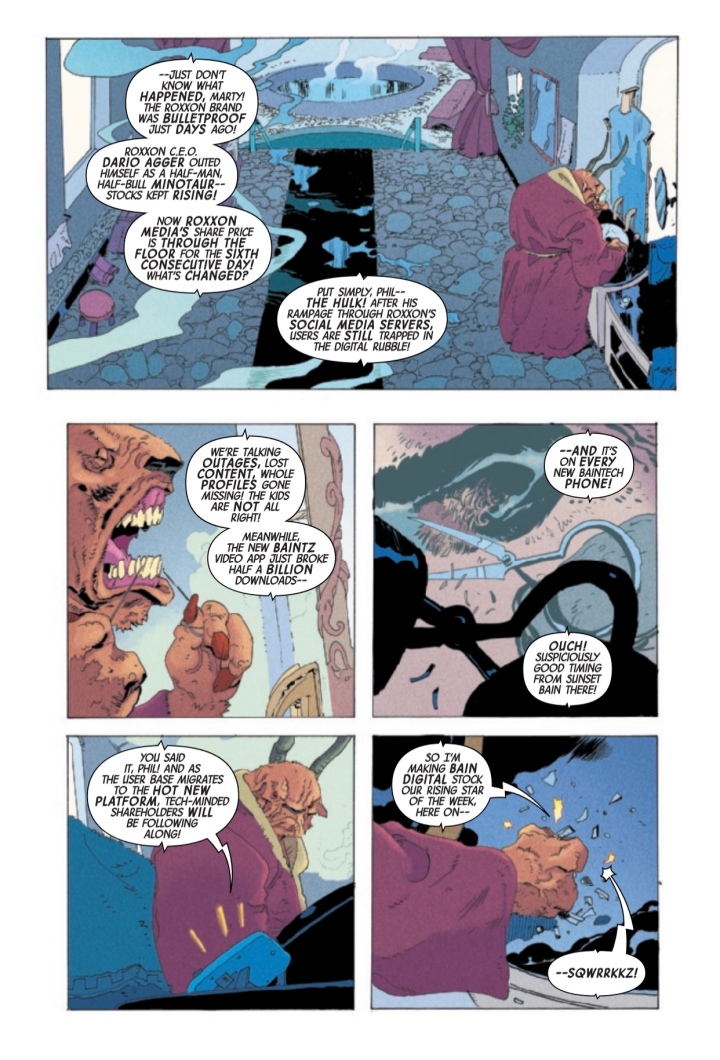 Al Ewing opens up a new direction for the Hulk in this week’s new tale. The overarching theme of something green, godly, and immortal that can stand the test of time has been placed on the back burner for a more current and relevant agenda. Ewing has always had two stories happening simultaneously. Now, the new surface-level story begins to get flushed out in the narrative of this issue. It turns out, a teen movement is forming across the Nation and Dario Agger, now known as a Minotaur and CEO of Roxxon, is stepping into the role that the prior Colonel played early on in this run. Sure, Dario doesn’t have a Shadow Base BUT readers will find a different tactical means that our new famous Minotaur decides to take in order to take down the Immortal Hulk.

Readers, my absolute favorite aspect of the issue was the emotional journey Ewing took this reviewer on from page one through to almost page fifteen. From the beginning, this issue felt like it was going in an extremely dark direction with the main character and his daughter. Without spoiling the details, this reviewer was still exceptionally shocked at the outcome BUT this Immortal Hulk fan was so happy to see the old Al Ewing back in full form. This issue was reminiscent of the first 10-15 issues that told such a straightforward yet frightening tale in such an impactful way.

Ewing shines the most when he has an opportunity to keep the elements of his story small, down to Earth, and emotionally charged. When Ewing steers clear of the heavy, supernatural, and futuristic, this critic feels captivated by his storytelling and practically loses himself until the turn of the final page. This is what has been missing in the IMMORTAL HULK these past few months and this reader hopes we can stay in Ewing’s sweet spot for a long time.

How does this reader know that the Hulk is back on track? Well, look no further than the splash page to end the issue. Ewing has brought back an extremely old enemy of the Hulk that “may or may not” have been used in the creation of Scientology today. This only proves the time, dedication, and thorough research, as well as care, that Ewing has for the character to dig up such a long lost character like this. Heck, why create a Hulk when you can find one of your own? 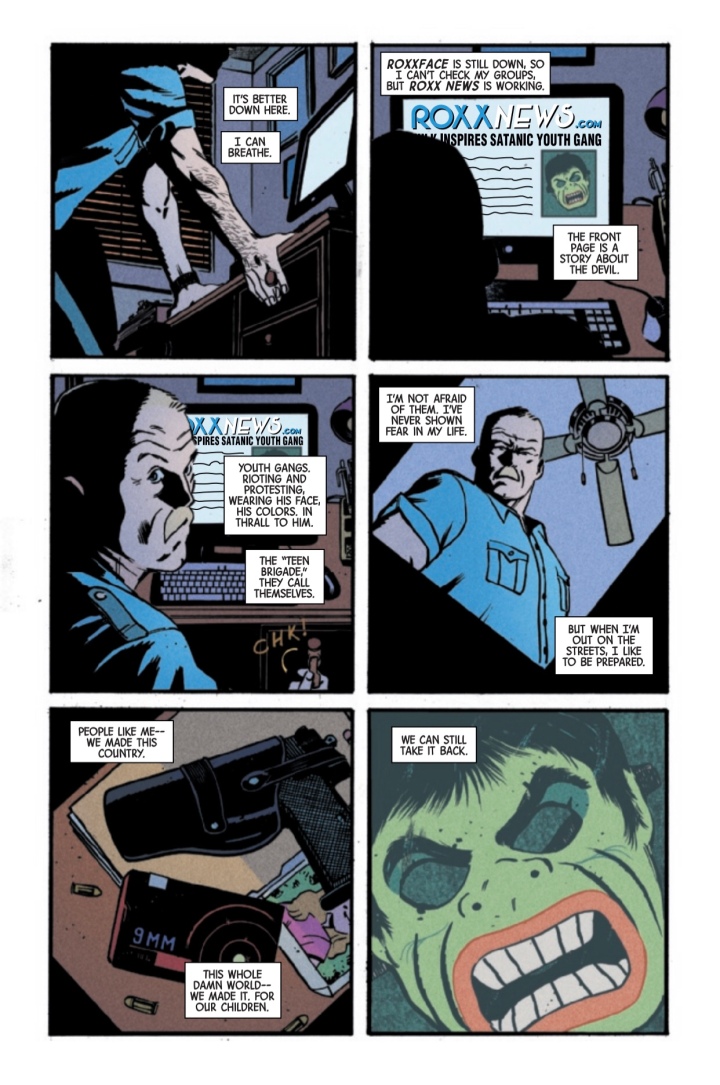 Now, as engaging and fascinating as this week’s installment was, the solicits made this critic a bit nervous. Anyone who’s read my reviews of practically every issue of IMMORTAL HULK released would see the utter admiration this reviewer has for Joe Bennett. The argument was even made in my last issue that Bennett’s art very well may be more important than Ewing’s storytelling. Well, this still could be the case. However, the solicits showed Tom Reilly and Matias Bergas on art for this issue. Needless to say, I arrived with lower expectations for this issue, especially not knowing too much about Reilly or Bergas. That said, my misconceptions were wrong and the art was very promising.

Reilly and Bergas have a much lighter tone to their illustrations. There approach just came off as more subtle, less violent, and surprisingly calm for a Hulk comic. When given the opportunity to showcase their work with larger panels and monstrous designs, this art team rose to the occasion. However, the main human character, as well as the smaller panels and page layouts, didn’t always have as much detail and often times came off more two-dimensional than three-dimensional. That said, this artistic team was a very good change of pace to throw in every once and a while to give Bennett some flexibility and breathing room for future issues. 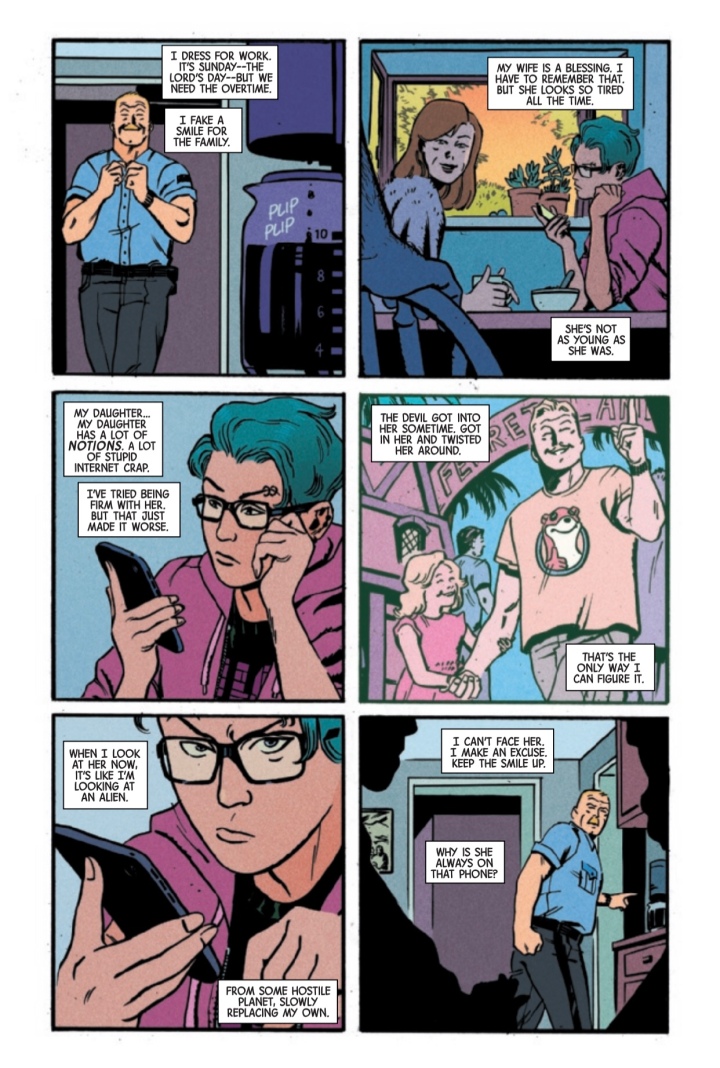 Overall, IMMORTAL HULK fans will leave this issue feeling like Al Ewing is back on track. The direction is clear. The villain is apparent. And, the Hulk’s motives are ironed out well. The supernatural, time-traveling, universe threatening, almost Biblical in nature storytelling has been set aside for now and it’s so refreshing! Furthermore, Ewing takes readers on an emotional roller coaster and ultimately introduces a future throw down that hasn’t been seen in years. This critic left the with more optimism than he has in months and can’t wait to read issue 29. Pick this issue up and let me know what you think!