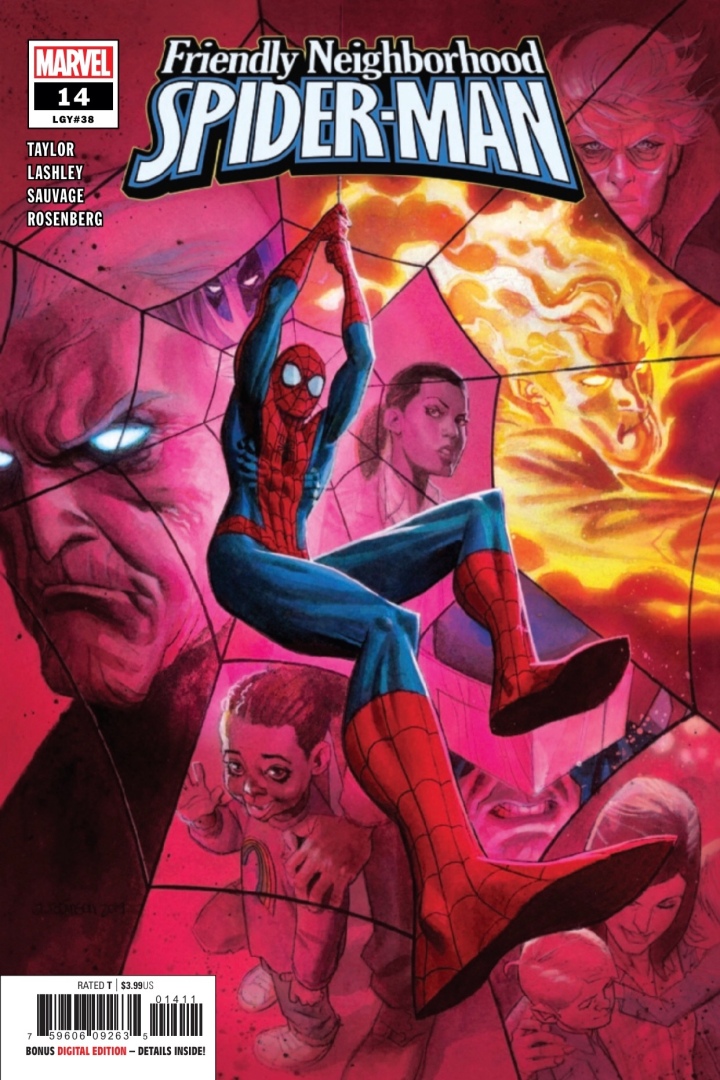 Tom Taylor concludes his FRIENDLY NEIGHBORHOOD SPIDER-MAN run with another emotionally charged, heartfelt, and inspiring tale to culminate what it truly means to be a friend. More importantly, Taylor elevates the character of Spider-Man to an entirely new level and showcases a side of our favorite webhead that many readers tend to forget… his relationships. You see, Peter Parker may come off as unreliable but Spider-Man is quite the opposite. And what this reviewer leaves this series with is the main reason why. 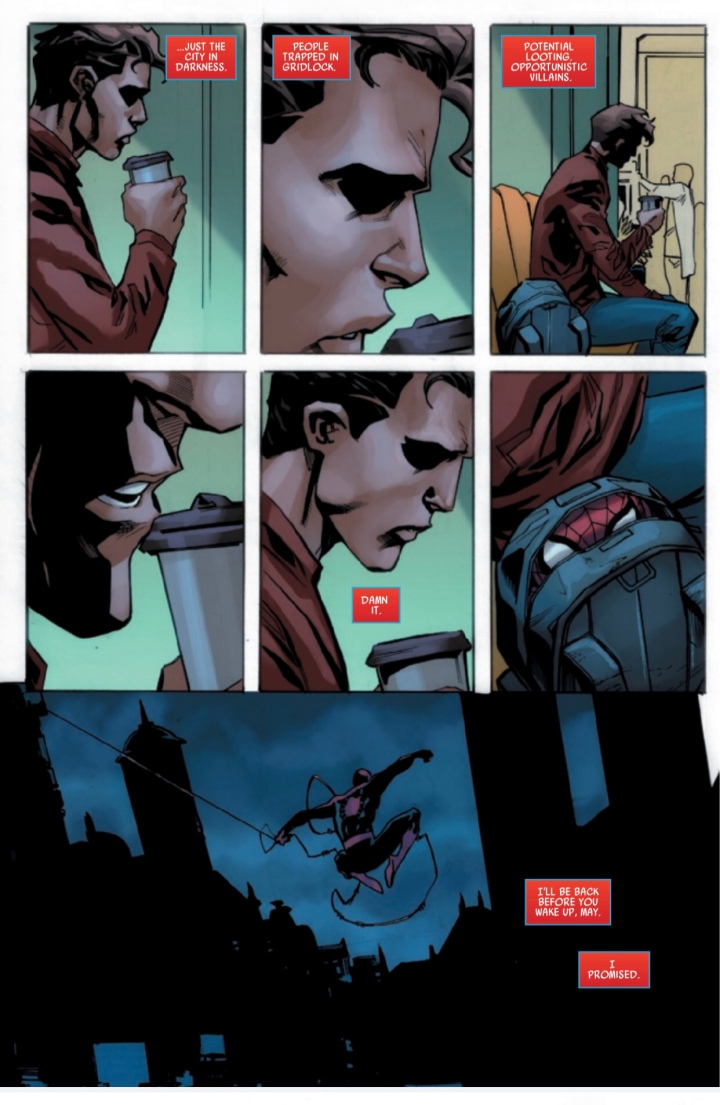 Readers, Taylor gets Spider-Man… PERIOD! And again, as this series wraps up, this issue continues to hammer home why Tom Taylor SHOULD be writing an ongoing, if not AMAZING SPIDER-MAN. Taylor makes Peter Parker relatable and continues to showcase is drive, humility, and compassion for the human spirit. Spider-Man is more than a guy with powers that throws out funny quips. He’s a man who ALWAYS puts himself before everyone else, sacrifices his well-being for complete strangers, and is willing to do all of this for the betterment of humanity without recognition. This has been Tom Taylor’s portrait he’s painted since issue one. And, as issue fourteen closes, it only makes this Spidey fan even more sad to see the series end. 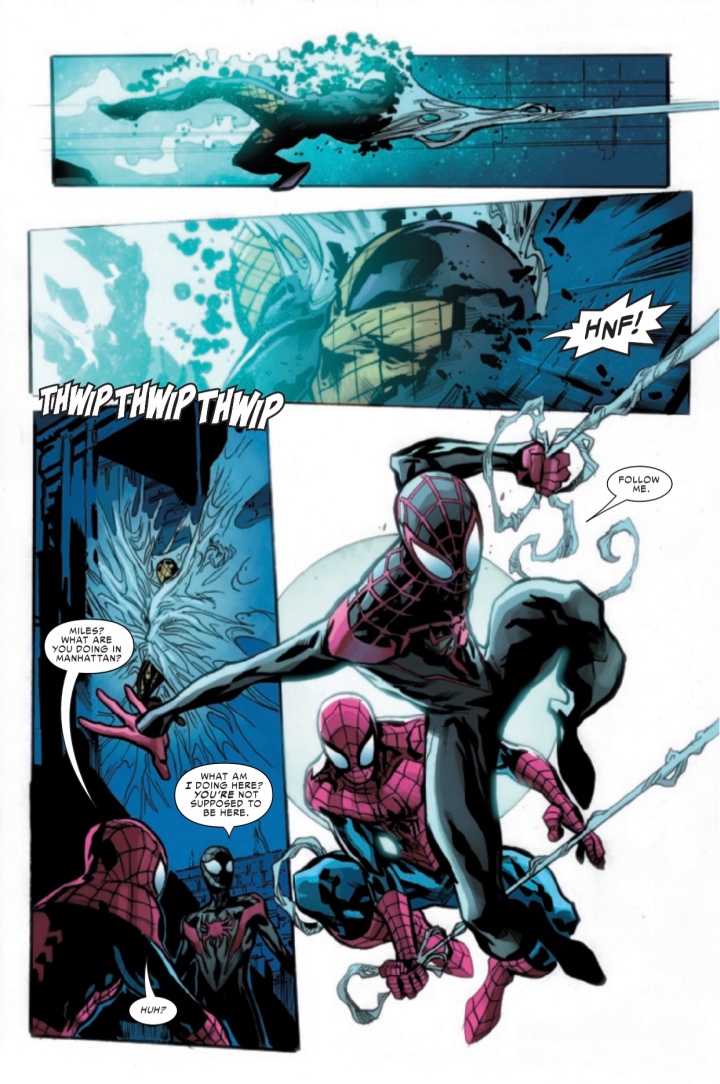 In this week’s installment, Tom finishes Aunt May’s Cancer treatment with a nice wrap around story to Peter as a boy and attempting to run away from May and Ben Parker. Readers see a frightened little boy that Aunt May reassures and in turn, becomes the rock he needs. Taylor has spent this series, as well as this issue, showing readers what truly makes Spider-Man that hero we all love. Sure, Peter has made his share of mistakes AND his Uncle Ben “may” have introduced that famous saying “with great power comes great responsibility”, but it’s Aunt May who has truly created the heart, the compassion, the humility, and the resilience that makes Peter Parker the hero we all love. Without May, there really is no Spider-Man… or at least the one we know and love.

In fact, Taylor shows readers that it’s not just Spidey fans that respect our Friendly Neighborhood Spider-Man, it’s actually the entire Superhero community too. From Iron Man, to the Fantastic Four, and even the Defenders, Peter has made his mark on everyone. And, isn’t it ironic that someone so interested in sticking to the small-time neighborhood’s and helping the little guy has the respect and admiration of some of the biggest players within the Marvel Universe?

As Tom Taylor’s run concludes, take the time to truly think about what he’s reinforced about the character that appears to be lacking in all other Spider-Man titles right now. Taylor reaffirms the foundation of what makes Peter Parker Spider-Man. It’s not his powers or his witty one-liners. It’s his perseverance and resolution to fight when no one else will. Readers, Spider-man is who he is because of Aunt May and what she’s taught Peter through all his hardships and disasters. This is the main reason why May getting Cancer and Peter being there for her is such a big deal. It’s May who has shown Peter what is truly important in this world, which is relationships. Fans, if this reviewer can get meta for a minute, that’s all we have after this crazy world goes down the crapper. It’s relationships. Regardless of what you believe, when you’re done with this world, you can’t take anything with you. That’s exactly why our relationships with the people around us are SO IMPORTANT. This is what Tom Taylor has been saying throughout this run and used Spider-Man as his canvas. Moreover, Taylor highlights the sacrifices that need to be made in every relationship and it comes through in spades as this issue ends.

This issue perfectly depicts Tom Taylor’s run to date and only magnifies the need to give Taylor an ongoing Spider-Man series. This issue hits all the bells and whistles and reminds readers what we’re all going to be missing as this series ends. This week’s issue of FRIENDLY NEIGHBORHOOD SPIDER-MAN was easy to follow, emotionally charged, well-paced, and will grab readers’ attention from the opening page. Tom Taylor has shown comic fans for fourteen straight issues now that he knows Spider-Man, his character, and what it takes to write this fan favorite. Technically, Spider-fans could pick this issue up and hop in with only the knowledge that Aunt May has Cancer and still love the heck out of it. Grab this issue and get ready to buy the trade. What are you waiting for? You won’t be disappointed.