Left behind, can Drax survive in this week’s all-new ANNIHILATION #4 by Keith Giffen. While Thanos seizes action and Nova fixes his course on a suicide mission, will this be enough to quell the Annihilation Wave? Bottom line, no Marvel Cosmic fan will forgive themselves for missing this issue! Let’s jump into the fourth installment of this epic event. 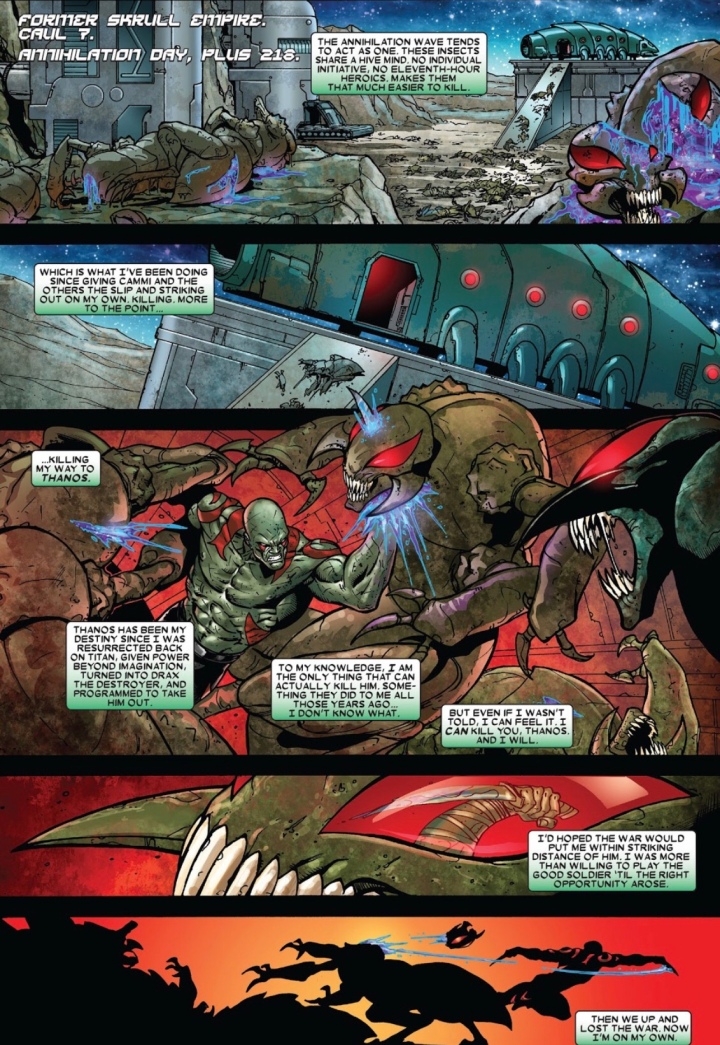 When last readers left ANNIHILATION #3, it appeared as though Drax singlehandedly sacrificed himself to let his friends and loved ones escape. Well, it turns out, the Destroyer had another idea in mind. Drax’s new mission is to work his way to Thanos and end him at all costs. Meanwhile, when readers last left Nova, it looked like his remaining forces we’re camping out in front of Earth. Now, this fan was anticipating some of Earth’s Mightiest Heroes for help as this issue unwrapped. If you were in this reviewer’s same shoes, then you to would be a bit disappointed.

That said, let’s not critique the issue of what ”we” wanted. Instead, let’s focus on what was received and the story Keith Giffen laid out for fans. This issue was intense, violent, enthusiastic, and extremely driven. However, this reviewer questioned how an entire militia was unable to put a dent into this Annihilation Wave, but, Drax the Destroyer appeared to be able to eradicate thousands in an attempt to work his way to Thanos. Furthermore, this comic fan was stunned to see how truly connected Drax and Thanos are. Sure, readers like myself know of their history but his relentless fortitude came across as unnerving at times. Readers may need to dive into some old issues of Drax and Thanos to excavate deeper into this “special” bond these two characters have with one another. 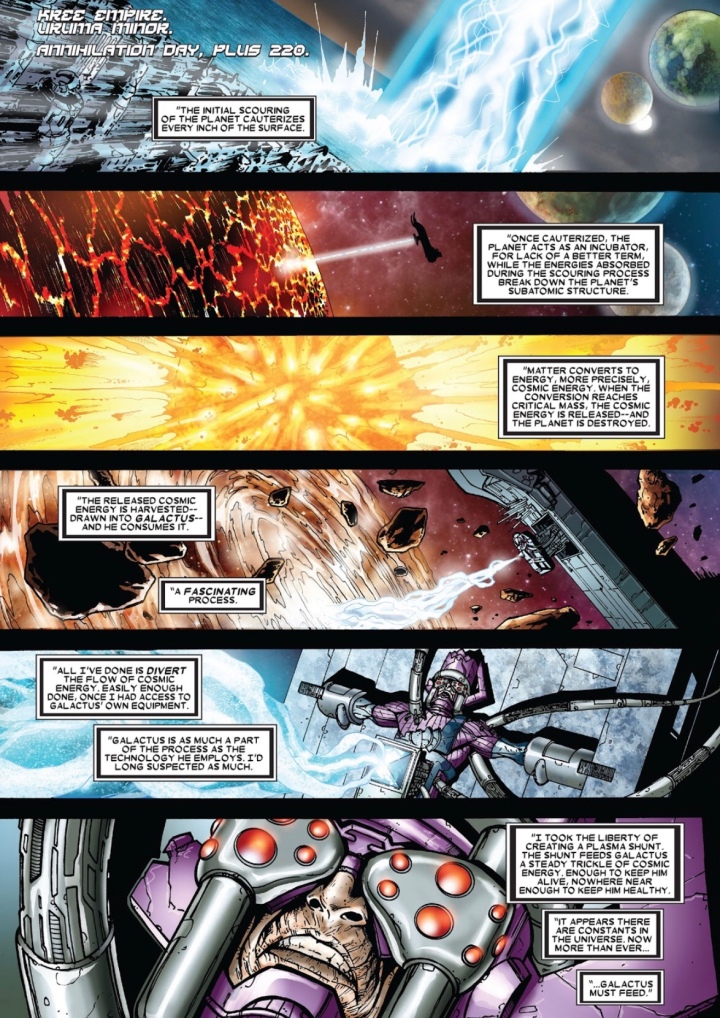 Ultimately, the story is overly straightforward except for one small detail that Giffen tosses into the anecdote in a manner that seems like a throwaway line. Thanos is asked by Moondragon as to why he ever got involved with Annihilus in the first place. Thanos’ response was “I was curious to see how a radical tilt in the universal balance would play out.” Really? Thanos helped Annihilus simply for curiosity? Ok, Karen. Giffen, this critic is sorry, but that’s not acceptable. Thanos, the Mad Titan who has an agenda for every plan, desires to control and take over the entirety of the known universe, simply signed up with this bug lord out of curiosity. This doesn’t fit Thanos’ character or modus operandi at all. Furthermore, readers later discover that the Mad Titan was being manipulated and used by Annihilus, which is something even less likely to happen. This plot thread seemed like a huge stretch to this comic fan.

This issue felt like Giffen was striving to make pieces of the puzzle fit together because the story was getting backed into a corner. The next logical step was for Earth’s Heroes to help… however they’re in a Civil War. Therefore, they can’t help. Well, why did Giffen send them towards Earth to hide? The only practical answer was to attempt to relate the current Marvel Landscape at that time. Hence, Giffen had to now think of a new way to stop the Annihilation Wave. Enter the one-man saxophone playing Drax, Peter Quill, and Nova. This reader can now only speculate that fans will see an explanation suggesting that this was the plan all along from Nova and Drax. One can only hope that is not the case. This reviewer absolutely hates thrown in, mid-story, semi-retcons to make stories fit. “See, this was the plan all along!” Again I say… Ok, Karen. But, let’s not got ahead of ourselves.

Now, even though the plot does appear to be a bit flimsy, this issue was still incredibly fun, entertaining, spirited, energetic, and vibrant. There was less dialogue leaving the art team of Andrea Divito and Laura Villari available to tell the story and the cover by Gabriele Dell’Otto was so impressively vivid, detailed, and sharp. It could truly draw any comic fan walking past the issue to pick it up immediately and purchase it sight unread. Giffen raised the stakes of this issue since there was really nowhere else to go, however, this issue seized this reviewer’s attention and quickly propelled me through the narrative faster than any prior installment to the overall story.

Even though many of the characteristics of the main players to this event don’t seem to jive, this reader still felt more interested in the story than he has in any of the prior issues, especially after the cliffhanger Giffen throws out to readers as the narrative concludes! Giffen’s tale is still imaginative and still feels like a big deal to the Marvel Landscape. Sure, the war element (large idea) to the narrative may have vanished to focus on specific characters (small idea), but there were still many interesting plot threads that are helping this reviewer hold on for one more issue, if not the last two. Pick this up if you’ve already been invested. However, if you’re trying to jump in now, this critic would highly recommend passing at this point.