How was “our” world made? Who exactly made the world we live in today? There are stories, truths, myths, and Biblical words that mention vague beginnings of creation. Technically, Ancient Hebrew literature is designed as mediation literature for humanity to ponder many of Life’s glorious questions, including what was stated above. This doesn’t make the Bible, or the Old Testament, any less accurate or true. However, it does leave questions for humanity that leave our minds and souls to ponder the existence of our world.

The reason this reviewer brings those thoughts to the readers’ attention are because Doom is God. Doom was once a regular man. He may have been smarter than the average bear but Victor was still a man with limitations. Even with these limitations, Doom became God. And, as Stephen Strange points out, the Sorcerer Supreme was given the opportunity to be God as well but chose against it. Jonathan Hickman points out this idea to draw readers back to the beginning of issue one where readers see Victor, Stephen, and Molecule Man surrounded by a bright light. The implication is that Stephen turned down the job of “God” and left it for Doom. That dear readers is perplexing!

Who does that? Who turns down unlimited power, worship, and praise? Hickman takes a moment to amplify the amazing character of the Good Sheriff and only hammers home how humble Doctor Strange really is. Additionally, as Stephen points out, Doom is Omnipotent, not Omniscient. For those confused between the difference, Doom is all-powerful yet not all-knowing. Victor does not know what will come or what people are thinking about. However, he has the ability to create and destroy at will. So, the reason this reviewer is dwelling on this aspect of the narrative so deeply is that Hickman has actually developed his own type of mediation literature for readers to ponder.

Was “our” God once a man given his power and ability? Were there two or more people confronted with this opportunity yet one declined being “our” God for the other? To many, this may sound sacrilegious. However, this reader isn’t diminishing the Ancient Hebrew God’s abilities by any means. This reviewer isn’t saying He isn’t all-power or even all-knowing. Simply put; where did our God come from? Humanity normally asks the question of the beginning of this world and its people. But, do we oftentimes ask the question of how “our” God was created? The Bible tells a story about our beginning and our God. But, what about His beginning? 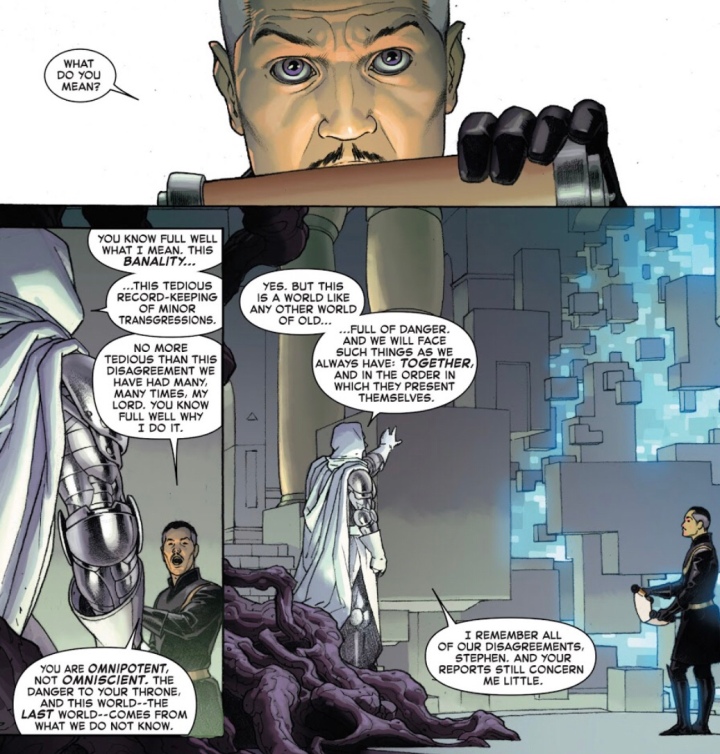 Hickman cleverly lays all thoughts and questions to rest this issue by giving readers the backstory, as well as a rough timeline of events that occurred after Doom became God. Fans find out that this world has been present for 8 years and only Doom and Strange remember the world before. Readers begin to understand how crafty Hickman can be about weaving in pertinent information without directly stating or dictating explicit details and backstories to his readers. Leave it to a certain young spider to explain what the new recruits from the last issue know and how they got to Doom World. But furthermore, leave it to Hickman to find a genius way of showing how this entire story will begin to unravel right before our eyes.

From one scene to the next, Jonathan Hickman orchestrates a theme for the downfall of his entire story from one character to the next. Knowing now that the story went from two people who know the truth of the old world to now people from the Ultimates World, Hickman guides fans to a discussion between Sue and Doom. This talk is important to the overall narrative because even Victor Himself says “truth is always the sharpest blade. It always cuts the deepest.” In turn, Hickman divulged the sheer clue that will eventually decimate this entire civilization; the truth. 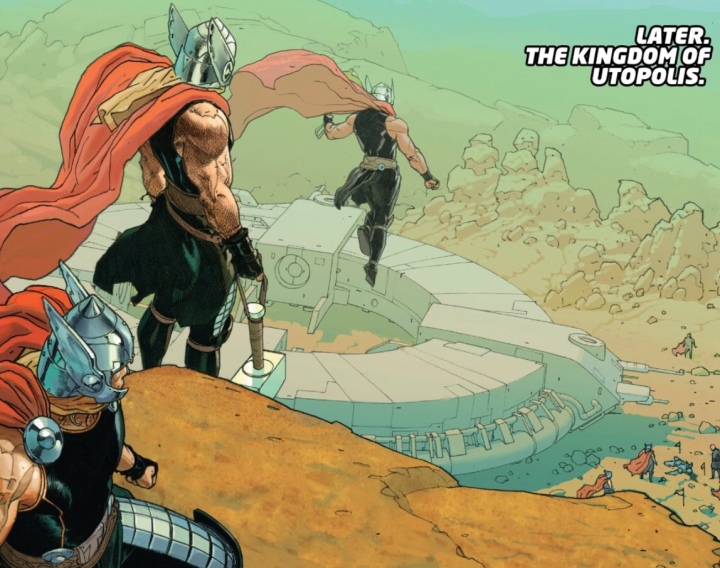 Additionally, Doom discusses another flaw in His world that “our” God has chosen to do. God Doom couldn’t stay away from His world. Doom says “ … once having made the world I should have removed myself. It is better to be unseen demanding faith than being defined by the mundane.” Is this why our God appears absent? Is this why humanity doesn’t have it’s Moses-like moments anymore? Did our God remove Himself from the equation because He was the flaw? Again, Hickman uses our favorite Heroes and Villains to share a meta-story that should cause all readers to truly ponder our own existence and question our own world.

Hickman once again proves that he is one of the best storytellers in any game right now. His ability to take the characters we love while telling a spellbinding narrative that will eventually reboot the Marvel Universe is unprecedented. Furthermore, Hickman is telling a meta-story under the surface about our own civilizations, which is something many writers believe they can do but fail miserably. From the first page, readers can see the time, the intricate detail, and the carefully worded dialogue that unearths deep thought while simultaneously ushering in clues and direction for the epic event and beyond. Each issue to date has had its own style that leaped off the page, grabbed this reader’s attention, and teleported all fans into the narrative with the help of Esad Ribic’s insanely talented art team. This issue should be read with the sole purpose of mediation over a cup of coffee and some friends. Hickman has truly done it again and continues to prove why this very well might be the best event in Marvel History.