THE ETERNALS are… eternal. However, that’s the problem. When they die, they are naturally resurrected. But, the resurrection machine itself is broken, or at least not working correctly. Now, this may not sound like a big problem until you realize that THANOS is back and has managed to kill the Prime ETERNAL, which he couldn’t have done without some help from the inside. Meaning, there is a traitor in their ranks. Meanwhile, in all this mess, Ikaris decides to fly off to protect some random kid named Toby Robson for no apparent reason. So, who is this traitor? And, who is this boy? Let’s dive into the ETERNALS #3 by Kieron Gillen to see who’s Sersi’s number one suspect as well as why Ikaris seems to care so much about this random boy.

As someone who has only developed a surface-level connection to the ETERNALS, I find this book so illuminating and informative in an extremely smart way. Gillen has constructed a murder mystery that’s used as a narrative plot device to acquaint readers with the history and foundation of the ETERNALS. His telling and style within this issue are clever, creative, and really aren’t being attempted in any other comic at MARVEL right now. Thus, his take is quite refreshing and has me wildly intrigued in who the ETERNALS are and what they bring into the MARVEL COMIC landscape.

Gillen incorporates situational plot devices that seem so fundamental to storytelling yet oftentimes are overlooked in an average comic narrative. Heck, sometimes these critical ideas are replaced with heavy doses of action as well as over-the-top cliffhangers and cameos. However, Gillen’s technique is merely to reintroduce a sea of ETERNAL characters in a way that seems so obvious and simple. Nevertheless, writers choose different tactics that make this concept seem fun and intriguing. 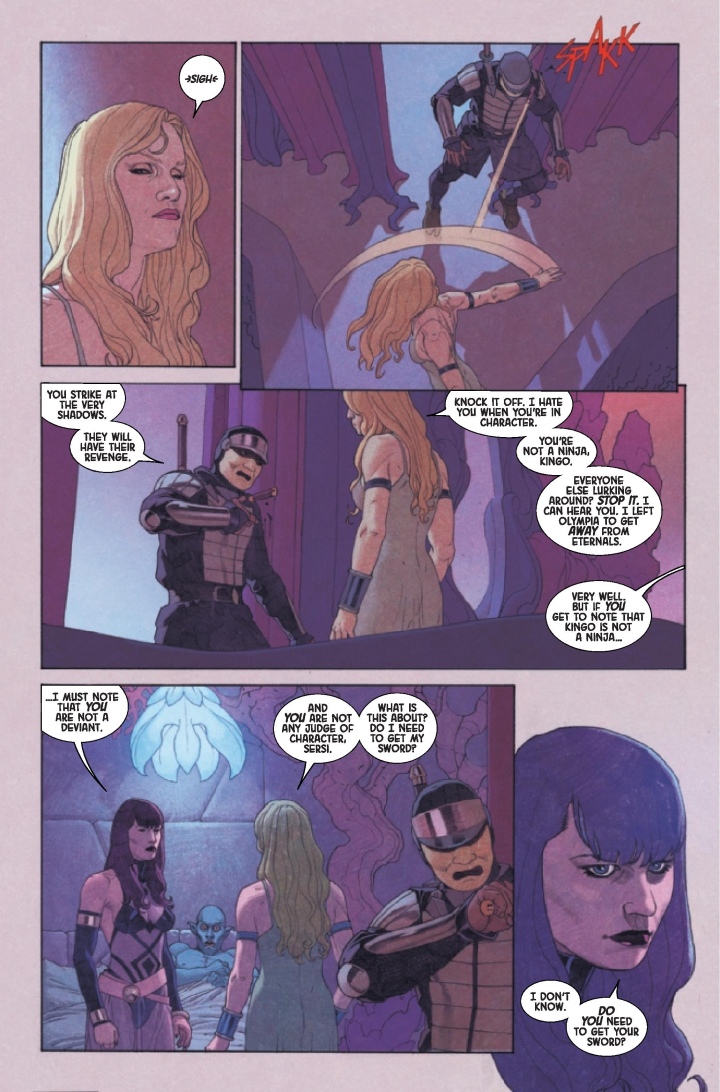 As for some specifics within the issue, the Great Machine is a fantastic narrator with a dry sense of humor that I love. In addition to the Great Machine, I appreciated the narrative background and development of Sersi and Thena. The notable association between the two of them throughout history was enlightening while drawing this reader deeper into the story. The only real knock I can give this week’s issue is that readers don’t find out who the traitor is nor any real clues as to who it may be, yet I have my suspicion as to who it is. If I was to guess right now, and I could be wrong, I bet it’s Sprite. Furthermore, we still don’t know anything about Ikaris and Toby Robson. Another ETERNALS issue goes by with little development on that front. However, I can’t help but think the death of Zuras, the Great Machine malfunctioning, Toby Robson, and THANOS’ return are all somehow connected. 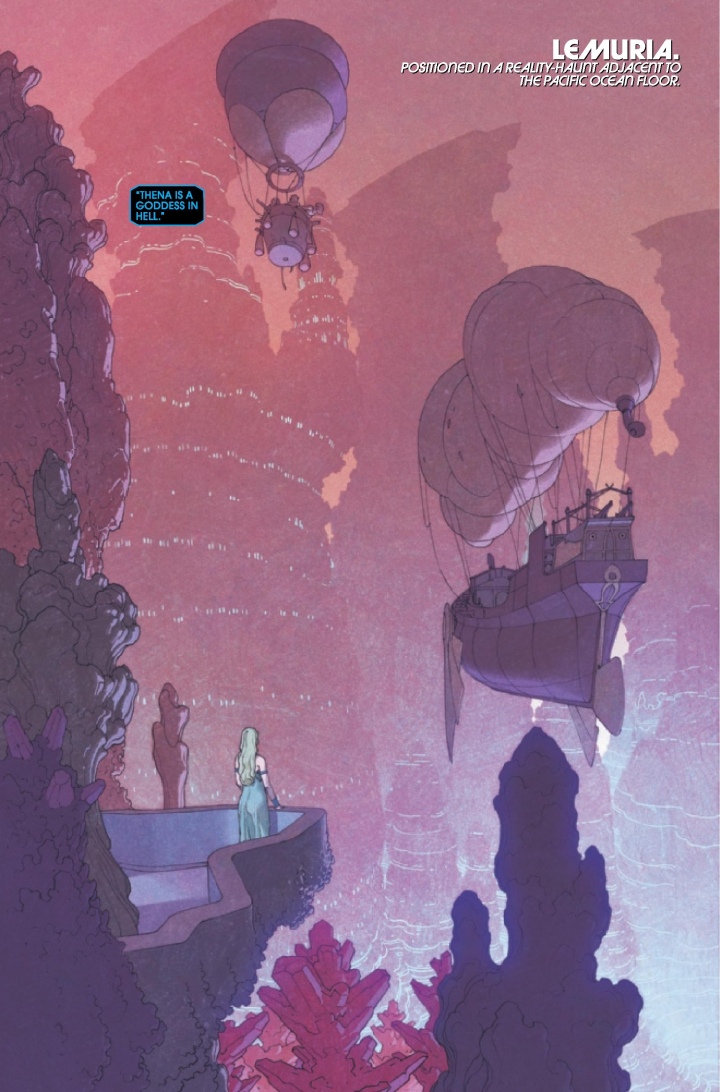 Esad Ribic’s style is definitely unique. Mixed with Matthew Wilson’s colors, the story feels like it’s almost in a dream with its light colors and nearly painted atmospheric look. Plus, Ribic is certainly well known for his character detail. However, sometimes the way he draws faces simply scares me. For example, Toby Robson’s parents practically look like demonic ogres with their dark, shadowy eyes and sunken appearance. Now, maybe that’s the point and we’ll discover something in the future. However, for now, they merely look… weird and almost deviant. Additionally, Thena’s eyes were extremely large in many panels compared to Sersi, which took me out of the story quite a bit. That said, Ribic was on fire with Sersi and she was drawn with such beauty and eloquence. It’s that more realistic look that I hope he can disseminate to the other characters throughout the series.

Overall, ETERNALS continues to be interesting, situational, and uses basic elements of storytelling to induct newer readers into the fold of these brand new characters. Gillen is the perfect writer for this job and I can’t help but love the murder mystery style he’s using to usher readers into this series. Now, even though I wish I received a bit more answers or clues as to who’s behind this quandary, I’m still all in and can’t wait for the next issue. There is so much to work with throughout this untapped series. And thus, I highly recommend taking a look at this series and snagging this issue of ETERNALS. Let me know what you think, have a great week, and God bless.

2 thoughts on “The Eternals #3 Review”