Almost 50 years ago, a comic appeared that would alter the face of Marvel Comics permanently. Writer Len Wein and artist Dave Cockrum revived the X-Men entirely, rebuilding the majority of the heroes with an altogether new global crew! This magnificent new comic was heavily praised and set the series off in a new direction, establishing the scene for Chris Claremont to make them the most prominent warriors in the Marvel Universe! Now, in GIANT-SIZE X-MEN: TRIBUTE TO WEIN AND COCKRUM #1 by Len Wein, over 30 of Marvel’s most prolific artists come together to rebuild this amazing story, each re-branding one page at a time to pay homage to this Marvel masterpiece! Let’s dive in a take a look!

Let me start by saying that GIANT-SIZE X-MEN: TRIBUTE TO WEIN AND COCKRUM #1 was a wildly unique issue to review. I don’t know if I have ever examined anything quite like it before. As much as some may say this is basically a retro review, it certainly was… but mainly only in the context of the plot and storyline. However, the immense art team added so many intricate layers to this review that it felt brand new at the same time. So, to any new X-MEN fan, let me continue by stating that this issue is a MUST BUY to take brand new fans back to the roots that helped mold the X-MEN into what they’ve become today. On the outside, this was basically GIANT-SIZE X-MEN #1, which was the single issue that sparked life back into the X-MEN and revitalized the title for years to come. However, on the inside, the artistic team added so much extra flavor which took this issue to brand new heights while truly complimenting two class acts of the comic landscape. 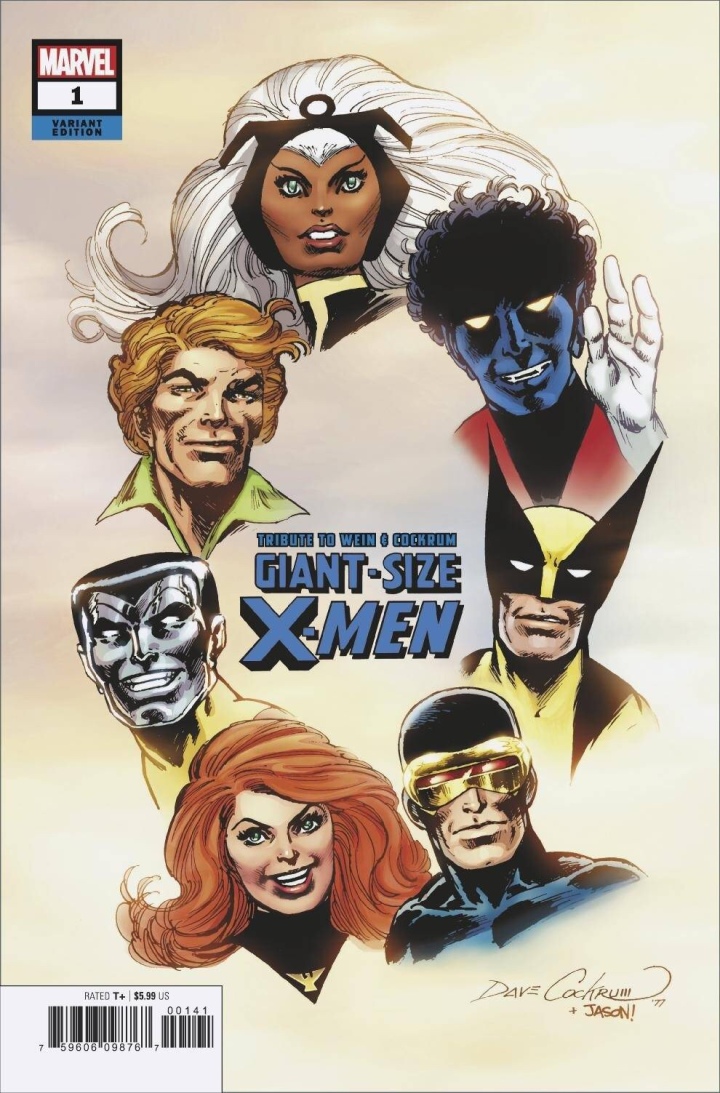 Now, can I simply reinforce how FREAKING outstanding the cover is?! It’s essentially the same cover as the original but updated, polished, crispy, and exploding off the front page! Additionally, I’d like to point out how self-contained the story is and how quickly any reader could jump right into this tale, be completely encapsulated by the new characters, and follow suit directly into the events that transpired without missing a beat. This “remake” is the perfect story to reconnect long time readers back into the franchise while also enlisting newer fans to take a trip back to the 70s’ for a history lesson as to how it was done, and done right! As a side note to the newbies, this issue helps explain why the old X-Men team was absent for almost 5 years with mini montages of the team sprinkled throughout the beginning. Without spoiling something that’s probably known by all older X-fans, let’s just say a rescue mission to Krakoa is in order.

Just like the original issue of GIANT-SIZE X-MEN #1 was a link between the old and new teams, this issue is serving the very same link… but for older and newer X-MEN fans alike. New fans get to see how outstanding this issue was with some amazing art from over 30 different artists while the older fans’ interests are rejuvenated with an updated, nostalgic trip down Memory Lane that’s centered around the focal point of the current X-MEN landscape; Krakoa! This is where it all began almost five decades ago. The progeny of this issue is truly uncanny and it’s because of Wein and Cockrum that we’re even here today with Hickman’s HOXPOX and now X OF SWORDS continuing this week. This was an extraordinary tribute with an astonishing artistic display that demands recognition and needs to be on everyone’s list this week. GIANT-SIZE X-MEN: TRIBUTE TO WEIN AND COCKRUM #1 is the same bridge it was 45 years ago but now between comic fans instead of X-teams. Pick it up and let me know what you think.