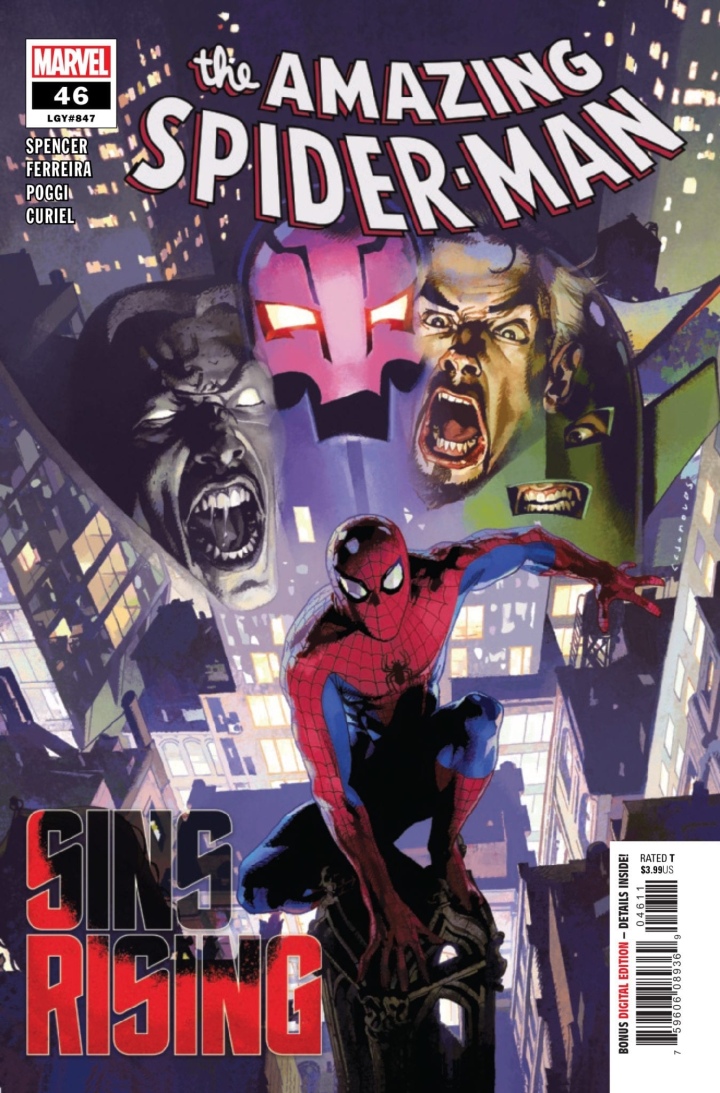 Spider-Man’s latest arc has seen the resurrection of a baddie who hasn’t been around for a long time, and after a great prelude special and a modest enough proper first issue, let’s see where the momentum will take us in our latest installment of Sins Rising. I’ll open my review with my opinion on the art.

It’s funny. For our site, I’m the go-to ASM and Venom review guy. I’ve made it no secret how much of a fan I am of Iban Coello and Mark Bagley’s art, and both men were the artist of the current Venom and ASM arcs, specifically their 1st chapters. Moving on to our second issues for each arc in their respective titles, both books see these artists being replaced by different pencillers. You can check out my review of Venom #27 to find out how I feel about that over there, but here, having lost Bagley and moving forward with Marcelo Ferreira isn’t too bad an adjustment at all. The art here looks great and definitely suits a Spidey book. I’m also a sucker for when artists draw the expressive “eyes” on Spider-Man’s mask…you know, how Spidey’s lenses flair up and widen or narrow depending on his reactions. Every panel Ferreira draws is stuffed with so much going on, its almost too much action in just one box. I feel his art is really at its best when he gets to do wider and larger panels, but its still a testament to how much he can cram into the smaller panels without sacrificing any major details.

Nick Spencer is shaping the Sin-Eater to be a veritable threat. The issue sees Sin-Eater let loose on Count Neferia and his crew during a presentation at ESU. Even with Spider-Man on the scene, there’s nothing anyone can do to stop the Sin-Eater from going through with this mission to “murder” the villains, and considering this was once just a normal man in a balaclava, his handling of all these superpowered Lethal Legionaries helps with the upsell. It doesn’t feel like we’ve crossed that bridge too far with Stan Carter yet. Everything we’ve seen him do sells him as a real threat to Spider-Man. As one civilian in the book calls it, he’s the Punisher with super-powers. His agenda is winning over the people of New York, much to Spider-Man’s chagrin. Its hard for Spidey to wrap his head around the approval the Sin-Eater’s methods are receiving, but its what’s happening to the Sin-Eater’s victims after their deaths that Spidey should really be flustered about. Even with knowing what happens to his targets after he’s shot them down, the end of this book has me feeling like we may have seen a casualty I wasn’t expecting to lose.

I really have no idea how any of this is going to tie into Spencer’s Kindred story anymore. This issue really cements the idea that this is just its own story, independent of whatever Spider-Man’s bigger mystery villain has in store. I’m not seeing what it is that connects the two, besides Kindred being the one to revive Stan Carter and supercharge him with his supernatural enhancements. Even with that said, this issue has a lot going for it. Whether its a bigger piece of an unfinished/still-ongoing work of art or maybe it’s its own tapestry, it’s shaping to be a fine design.