Joe Kelly is the writer that defined Deadpool. He did such a good job that his work from Deadpool alone earned its own omnibus. And let me tell you; it’s a big bugger. But as he pens The End: Deadpool #1 not only does he bring Wade to life in a way few others can, he also brings him to death in an unexpectedly introspective way. 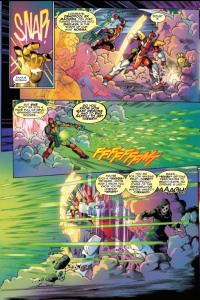 The writing flows smoothly and has the signature irreverence you have come to expect as a reader from Kelly when writing the regenerating degenerate. Its quick, entertaining, self-deprecating, and yet this issue feels a little convoluted; and not in the 4th wall breaking self-aware way we all know and love. It feels like a swansong, which is appropriate given the title, but it’s lacking in the fulfillment area in the wrap-up. 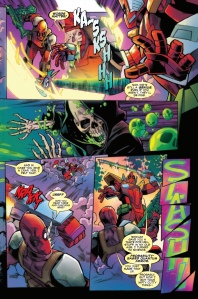 Mike Hawthorne’s artwork is bright and energetic enough to pull the pseudo-introspective writing together and is, in fact, crucial for a lot of the humor to actually work. We see one of the multiverse’s greatest romances blossom and reach the inevitable stagnation of all pop culture relationships, and Death has never looked or smelled better. 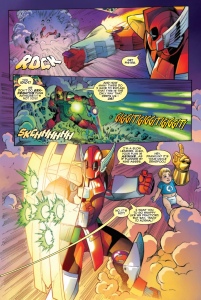 In the moment, I really enjoyed this book. The writing made me chuckle in a way that’s sorely missing from a lot of comics now. This felt like a nostalgia trip to the late 90s, except with it being 2020. Additionally, the ending felt a tad overlong. It’s fun but feels dated, not that that’s a bad thing. It’s like watching an old Jim Carrey movie; entertaining but you’re glad things have moved on. The title is appropriate. This is The End and will sit alongside my Joe Kelly Deadpool Omnibus as a relic of a slapstick time.