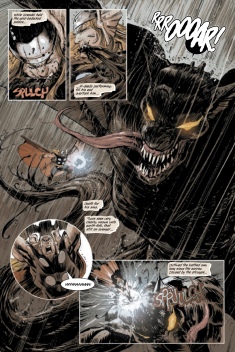 Andi Benton is attracting dangerous symbiote sea-creatures and corpses wherever she goes, jeopardizing unintended civilians around her. Knowing that these attacks will never stop, she heads into the deep of the New York Harbor in pursuit of her attacker. Bringing the fight to whoever they may be, she encounters a creature, “Mother”, who wants the Scream symbiote to serve as a surrogate daughter. Andi’s life, however, means nothing to Mother, and she wants to steal away with the Scream symbiote before Knull arrives (read Donny Cates’ Venom) and annihilates all life on Earth. 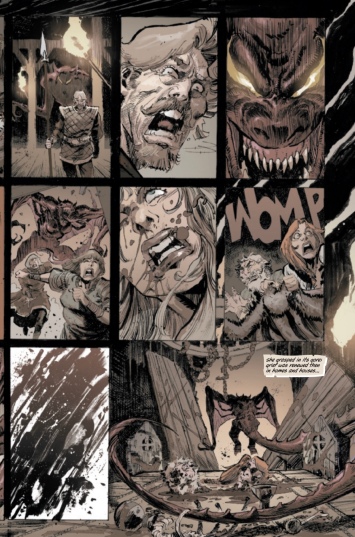 So, we finally have the full motivations behind these mysterious attacks on Andi. Not to say its been a long build-up. Clay McLeod Chapman gave us readers a fair amount of the plot to accurately guess where things were going, and issue 3 just hammers that nail on the head. Chapman has so far done no wrong with the character of Scream, and that streak continues unbroken with our third chapter of this arc. Andi has quickly come around to the physical presence of her new unwanted symbiote. In fact, before this book ends, Andi seems to be starkly dependent on its presence, and not just for the sake of her own survival. We have here an issue where Andi and the Scream symbiote share a inner-dialogue conversation about her childhood as they give chase into the deep waters of the New York Bay. The conversing between the two, host and alien, seem to imply that Andi has either warmed up to the symbiote, or she’s realized that considering the threats coming after them, she has to put her anger and self-pitying aside and maintain a mutual symbiosis with the Venom symbiote’s spawn. But lets explore the nature of their conversation, one where the topic of Andi’s mother comes up. There is definitely a theme here, with the Scream symbiote asking about Andi’s mother and Andi sharing a story about her so freely. Then there’s the antagonist here is, referred to as Mother, and the implications of the opening pages within this book (NOT a spoiler if you’ve seen the preview pages), an opening sequence that shows us a fight long, long ago between Thor and the “symbiote dragon” Grendal. In the tales of Beowulf, Grendal and its mother were principle villains. Is it safe to assume the “Mother” attacking Scream is “Grendal’s Mother”? What Donny Cates started in his Venom run alllll the way back in the very first arc, Chapman continues to explore, tying in more Beowulf lure into the history of the symbiote race.

And can I say how much I love Chris Mooneyham’s Grendal? We’ve seen this dragon several times in other Venom stories since the Cates run began, but its appearance here is definitely my fave. I’ll continue to state that Mooneyham was the right choice to draw this gritty book. We get a chance to see Scream take on a new form once she submerges into the bay, and it gives Mooneyham a chance to draw our heroine with new, exaggerated figures…maybe we’ll get an action figure of this form on day…If you read Absolute Carnage (or its dozens of tie-in comics) and enjoyed the moments of horror Stegman’s art provided (that sounds like I’m saying Stegman’s art was horrific…obviously I mean the tone and dark mood his visual provided), then I’d say Mooneyham carries that thematic into this spin-off title perfectly. Finally, I won’t deny Garry Brown his credit. Any time I can read a book with multiple artists, and I don’t even notice the discrepancy between the two artists, I don’t even realize I’ve hit the point in the book where the art temporarily shifts, all parties are doing a good job! Honestly, I am very happy with this art team!

Scream: Curse of Carnage is both an entertaining follow-up to Absolute Carnage and addendum for Venom. It manages to tell its own story while still staying within the circle of stories, developments, and twists that the two aforementioned books have set up. This issue suggests that Andi’s past life and familial longing are going to continue to get put into play as this story rolls on. At least I hope so. Between little teases of Andi’s life before becoming Scream (or Mania or Hell-powered…) and her changing relationship with the Scream symbiote, and the menace of Mother and her kin, this reader is still singing this book’s praises!