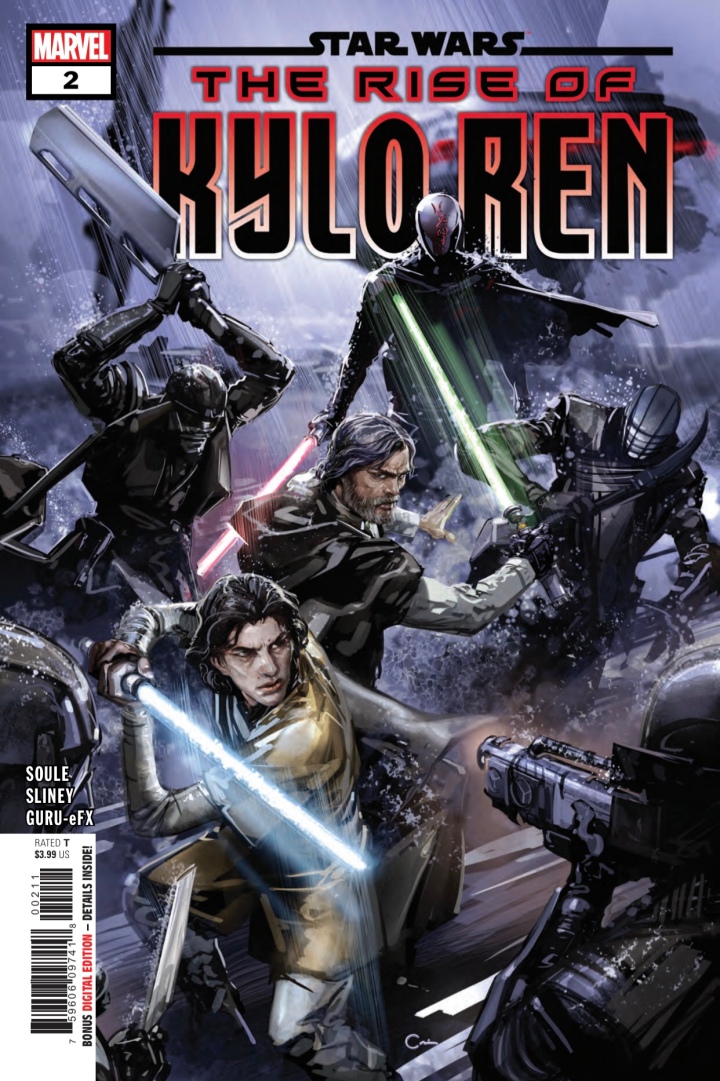 What really happened between the prized student and the master? Ben Solo has proclaimed that after being attacked by Luke Skywalker in his sleep, he has done the unthinkable and killed his uncle and legendary Jedi master. The remaining students don’t believe it, but even they cannot sense Luke via the Force… will we get the truth this issue? Has Ben really stricken him down? And just who or what are the Knights of Ren?

Not every book can draw you in with just a glance at the cover. However, Rise of Kylo is two for two in this reviewer’s eyes. The initial issue’s main cover was a thing of dark, foreboding majesty, giving even non-Star Wars fans a moment of pause to think “holy shit, what is this!?”. It’s just flat out badass. Issue two is equally effective in its’ eye-catchiness. The new dark power and the legendary old master teaming up to take on the Knights? Yep, I’m in. The desire to crack this baby open is a credit to cover artist Clayton Crain. Does the meat of the issue do justice to the eye-candy cover? Let’s find out!

We left Ben in the tangled web of deception that is Snoke’s dialogue. We know better than to trust him. We know to heed his words with caution and skepticism. But does Ben know that? The first thing you notice is the wonderfully deep hues of blue and green; a mix of enchantment with an undertone of mystery; it’s as if we’ve been transported to some floating aquarium-space-forest. With plant-life reminiscent of ‘Avatar’, we find Ben spewing teen-angst with the best of them, declaring his hatred for his family name and that “everything is a lie”. Ultimately, Snoke is able to convince Ben to track down and join the Knights, apparently believing they will help set Ben on the path the Snoke so desperately desires him on.

Cut to a flashback a few years earlier, with Ben riding along with master Luke, racing through the stars on a “Jedi mission”, whatever that could be. He seems to be holding a telepathic conversation with Snoke as they travel; it is unclear whether Luke or anyone is privy to it at this point, or if Ben is in fact good enough to conceal this conversation from his fellow Jedis. As we continue the conversation in the subsequent pages, it becomes evident that Snoke is sewing seedlings of doubt in Ben’s mind. Doubt regarding the Jedi, and regarding Luke Skywalkers’ intentions to properly train and utilize him to his potential. You almost get the feeling that Ben will wind up with something to prove… hmmm.

After some treasure hunting, we come to the main event! Luke Skywalker versus SEVEN of the Knights. In true cinema fashion, Luke has no problem with those odds. The meeting unfolds very nicely, and the tension builds well over a few pages leading up to the battle. The child in me can’t help but see Luke draw his lightsaber and think “oh you guys are f$@&%d now!”. (Ok, maybe the child in me wouldn’t have used those words exactly, but you get it).

It can sometimes be difficult to express action, movement, danger and a sense of “being in it” in the comics medium. There’s only so much artists can do with a static page. This is a shining example in this reviewer’s opinion. Every page felt like I was ducking, dodging, dipping, throwing wrenches… wait. Seriously though, the action is very well conveyed, and it doesn’t hurt that Luke delivers some pretty solid tough-talk, all while sounding above it all, calm and composed, just like a Jedi master should. Ben and Luke’s compatriot sums it up by simply uttering “magnificent”; and I agree.

Two small quibbles. 1) The transition from the flashback fight to what I can only assume is the present day, with Ben’s three ex-Jedi comrades finding him and ready to face off, was a bit clunky. It took a moment to compose myself and realize that we were transitioning. Not a big deal at all, just an observation. 2) Although the art overall is very impressive, the faces do tend to resemble potatoes and bring back memories of watching Batman the Animated Series when Clayface was melting. That said, you do get the feeling you’re watching Adam Driver and Mark Hamill in the panels; so a 50/50 stance on the faces.

This issue was well-paced, threw off some dazzling colors and effective fight panels, and ultimately set us up nicely to continue the overall story. It provided excellent context and background into the two sides pulling at Ben’s mind, and it seems totally reasonable that seeds of doubt may be creeping in. Admittedly, this reviewer is only a slightly more than casual fan of the Star Wars franchise. However, I’d be lying if I said I wasn’t excited to follow this book and see how it plays out.