Frank has had some baddies on his radar for a while now but it looks like someone has beaten him to the punch. The punch as in, well, we all know what the Punisher is famous for. Frank even admires his handy work! But is this mystery character a potential ally, or just a new threat? Grab a bottle of Russian vodka and dive into this week’s all-new PUNISHER SOVIET #1 by Garth Ennis. Just leave the kiddies at home because this MAX series dials the language and violence up to 11. Let jump into the issue! 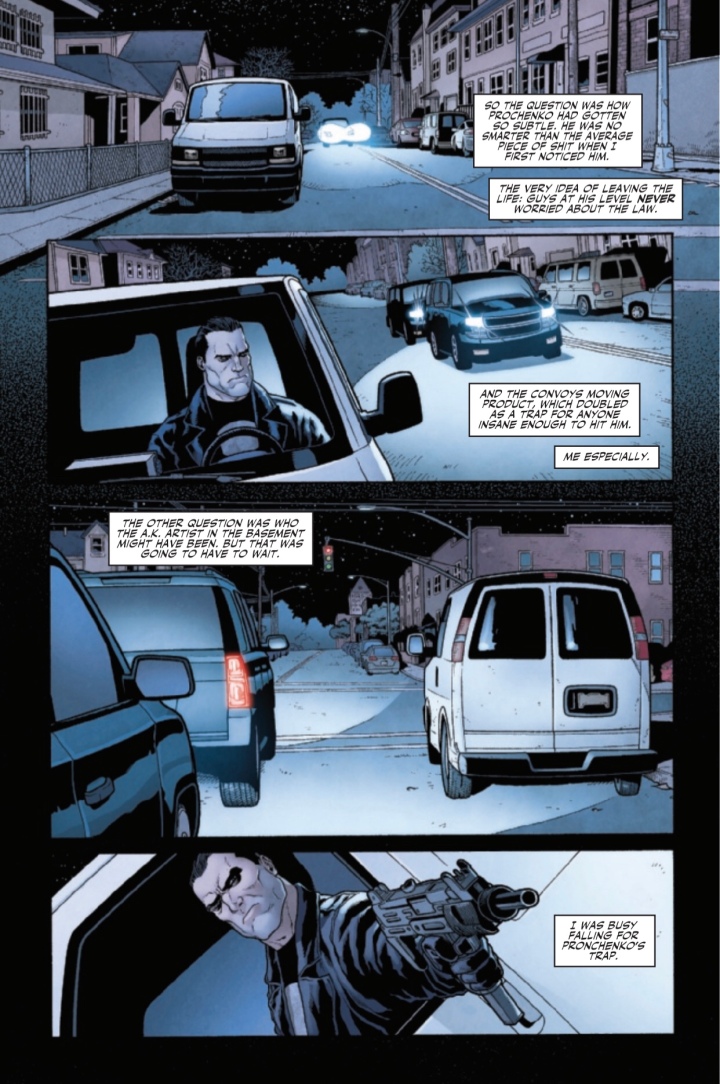 I must admit, in the realm of comics, I’m relatively lean on my Punisher knowledge. I’ve seen the movies and the Netflix series, and I know the gist. Bad guys killed Frank Castle’s family, Frank Castle unleashes the pain on the bad guys. Pretty straight forward premise. That said, even MY ears perk up when I hear “Garth Ennis” and The Punisher. His highly regarded previous run on the character has been on my ‘to-read list’ for a long time. So, I was relatively excited to read this issue.

Now, this book opens with Frank looking badass in a trench coat holding a shotgun and standing over a room full of bodies. What else would you expect!? Frank explains how impressive and effective these kills were; “only problem”, Frank says, “it wasn’t me”. Ok, I’ll bite. We spend a few pages with Frank and who we can assume is some kind of law enforcement insider that acts as his ‘informant’. While their conversation drones on a little long for my taste, I can forgive it. With our clichéd manila envelope of ‘information’, we join Frank on his stakeout, where we get a little more background on the replaceable ‘nothing legal sticks to them’ underground criminal businessman that’s par for the course. Fair enough.

Admittedly, I thought the dialogue was a little bland, mostly just “I’m going to follow these bad people and catch them.” Then, Frank drops a little joke about knowing he’s being set up and proceeds to hang an Uzi out the window and light up these scumbags. 0 to 60 all in one window roll-down. Do windows still ‘roll’ down? Well, I like to think Frank has an old school, power nothing battle van… less chance of something failing, right? Sounds tactical to me! Next, after a solid car chase and a panel of what looks like Frank wearing guyliner, the creative team delivers what I thought was a pretty clever play on the old drop out through the floor of the vehicle and into the sewers, resulting in Frank literally blowing away all the baddies converging, who’s last thought was surely “we’ve got him now!”. One of those poor bastards’ last thought was much worse, as Frank obviously needs someone to pump for the info! I’ll let you read through the issue, but it sure doesn’t seem to end well for random henchman number one. 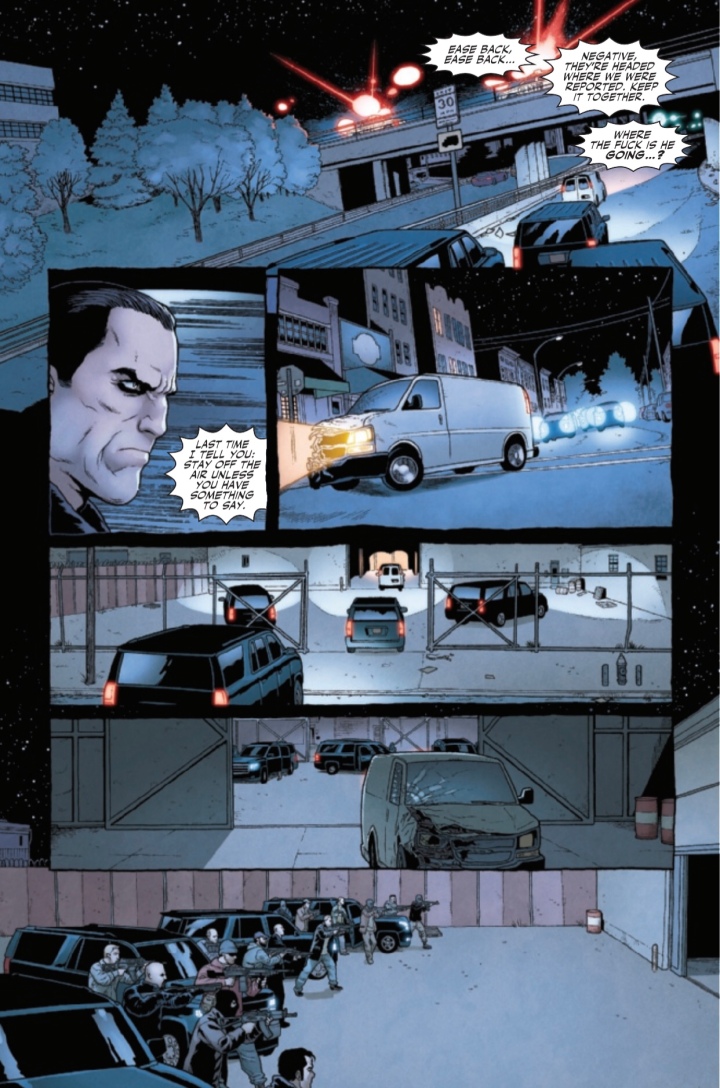 I haven’t talked about the art yet; on the whole, it’s serviceable. It’s not going to wow anyone, but it’s also not going to turn anyone away either. The art is good enough for what it needs to be. I do think the colorist did a pretty good job of shifting the color palette with the tone of each few pages. Where the art really shines to me is the few pages immediately after the explosion, leading up to and into Frank’s “chat” with his prisoner in the woods. There was some great use of contrasts in my opinion. Eventually, Frank finds himself in some hip club thinking he’s tracked down the goons he’s looking for, but what he finds is… [potential spoiler?] who we assume is the man who artfully riddled with bullets the deceased criminals from the opening page. With a glass raised in hand, and bodies littering the club, the mystery man welcomes Frank, saying he expected him earlier. Hmmmmm…

Though the set-up and main arc of the issue (Frank hunts criminal overlord) is certainly not a new concept, the book landed two or three jokes that legitimately got me to chuckle out loud. The art isn’t flashy but gets the job done, though I expected something a little ‘grittier’ for a MAX series. At times the dialogue seems a little too wordy and bland, and while I won’t be raving about this title, the reputation of Garth Ennis and the intrigue of who this new character could be will have me coming back for the next few issues. For a $3.99 price point, especially if you’re a Punisher fan, this is a good enough first issue. It’s worth noting that I enjoyed it much more on the second read through.