Gwenpool Strikes Back has been a little uneven so far, with a good first issue, and a not great second effort that soured me a bit coming into issue three, but I’m still here.  However, despite some of the same problems still lingering around, which I didn’t enjoy last time, I found myself back on the side of the happy fence a little more here.  So lets see just exactly what Gwenpool is up too now in her quest to stay relevant in the Marvel Universe. 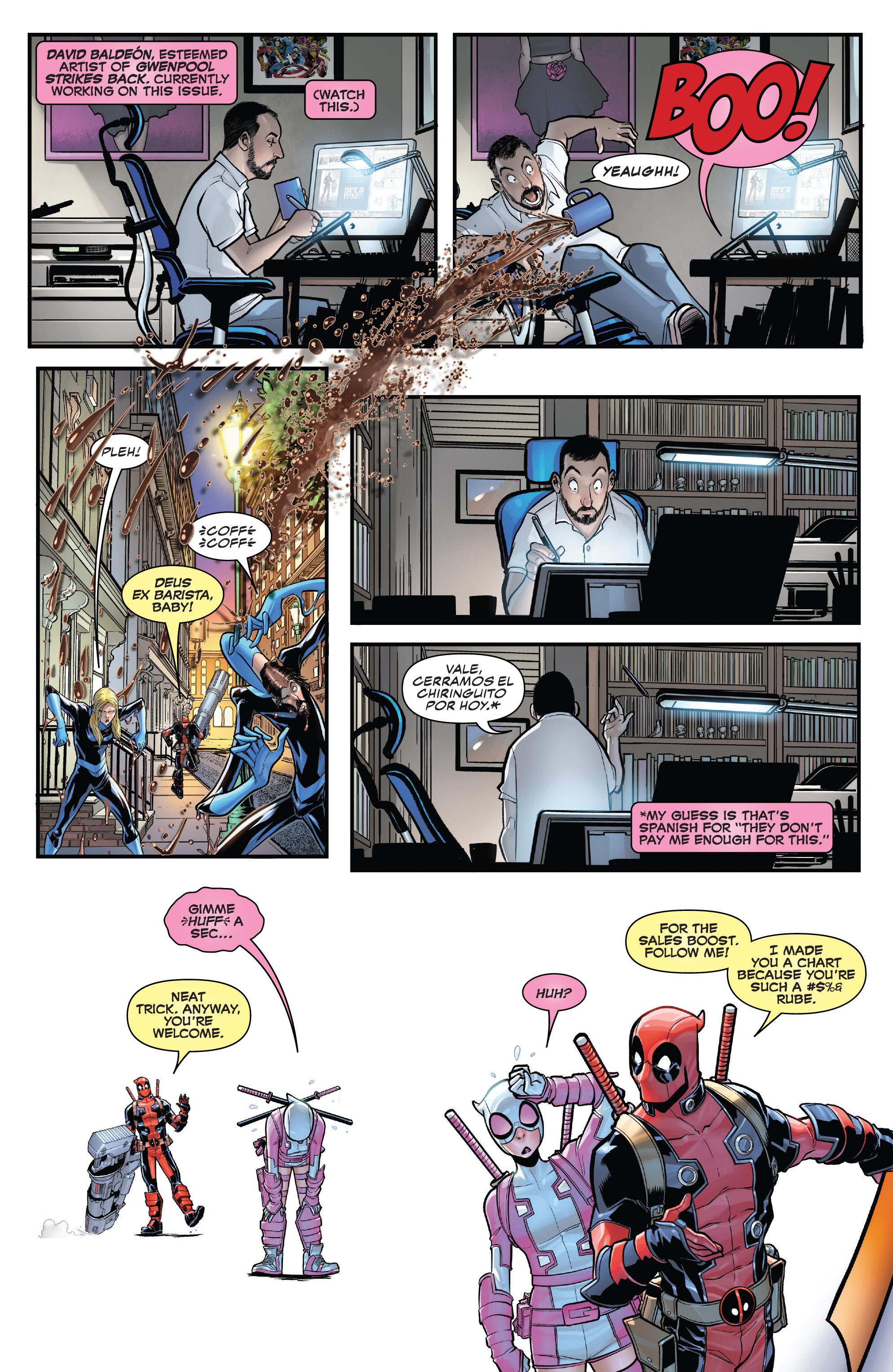 The issue begins with Gwenpool continuing to run away from the Fantastic Four’s Reed and Sue, with Deadpool not far behind, making it the perfect time for Gwen to use her ‘panel powers’ and escape. A quick lesson between the lines of the comic from Deadpool, give Gwen her next idea to remain relevant, giving her the idea to throw an old fashioned 90’s swimsuit bash, with a couple huge twists the attendees wont exactly be privy toot. At least to start this is a better setup than the previous issue, which bordered on way to awkward and weird, even for a Gwenpool comic book, and missed the mark with humor completely.

As we move into the second act of the book Gwenpool starts spilling the beans on the true purpose for everyone being present on the island in their best swimsuits. It’s not entirely a beach party you see, in order to remain relevant Gwen must ‘break bad’ once again because that’s what the people crave, and her sales demand, so everyone who attended the island is now trapped there and assigned a counterpart to fight.  Again much better than anything we got the previous issue, and at least some of the jokes do hit here, although Leah Williams is very heavy with the sexual innuendo, which seems unlike any Gwen I’ve read previously, and kind of takes me out of the book when it pops up.

As the issue closes because of the push back from everyone present, Gwen takes things one step further, revealing she has one final an ace up her sleeve … Bruce Banner.  With a gun to his head Gwen sets up the cliffhanger for this issue, unknowingly to her causing much more mass chaos than even she ever anticipated, which at the least sets up an interesting premise to come into next issue now that everything is setup, however the series as a whole still isn’t quite satisfying my Gwenpool itch that has lingered since Hastings left the title.

The art it a tale of two worlds and looks much better in the second half of the book, at least to me personally, than how it all begins. Its nothing that affects the enjoyment level I got out of the title as a whole but its something that seems at least noticeable.  Gwen’s character also at points changes throughout the title from looking very very young, to much older by the end of things, which ironically sets up her cover shoot for the issue, so its all a little strange how the art rolls along here but again not bad.

Just a minor rant that has annoyed me a bit about the character since arriving, I get that she knows comic books continuity, and can use it to her advantage, I actually found it endearing about the chracter at first.  However where is she getting hte comics now to know there have been 24 issues of Hulk out to date?  It would play better to me if since arriving in the 616 Gwen had gaps of things that have happened since she arrived.  Does she know Bruce turns into Hulk, YES, but should she know about all the new death stuff going on, NO, and it would be funnier (at least to me) if she is there trying to make him mad and turn into the Hulk, and just failing repeatedly because she doesnt know the new ticks of Banner.  I think its just missed attempts at the comedy in this book that put me off it more than the over used sexual innuendos.

Overall, the middle issue of Gwenpool Strikes Back is a slight improvement from last issue, but still not something I would give a recommendation for, like I did the characters (Gwenpool’s) initial and introductory series.  The premise here is better, and seems almost like a two shot that continues into next month, but a lot of time is spent setting things up here, with minimal action and payoff. Add in some cringe-worthy humor it just makes for an uneven experience as a hole no matter how much I want to like it.  A passable effort I expected more out of really.