This is it! Frank’s last ride on the Soviet express. The last issue saw Frank lose his hostage and bargaining chip, Pronchenko’s wife Zinaida, and his newest unlikely ally, Valery Stepanovich. With Valery’s sacrifice, Frank traded in one downed helicopter for Pronchenko’s three sons. There’s nothing else left to do now, except for one Punisher and one Russian gang-leader to collide… So pick a side and jump into the final issue of Garth Ennis’ “Punisher: Soviet” story, Marvel MAX style! 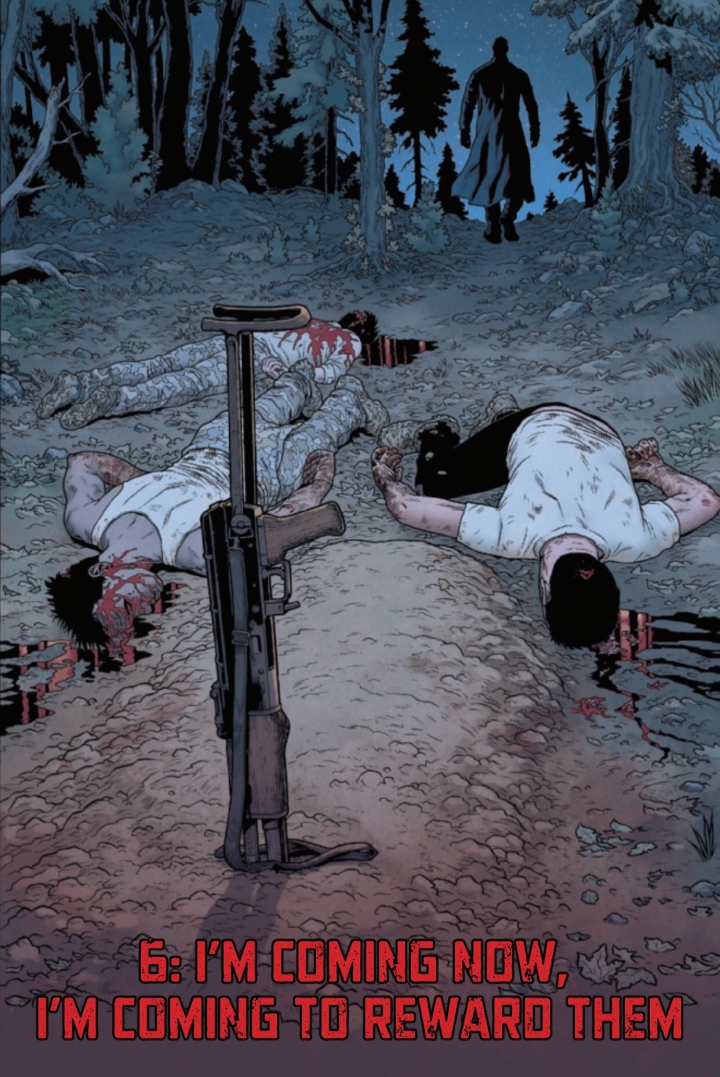 Lesson number one? Don’t talk back to the Punisher.

The spectacle of the last issue’s climactic chopper battle is now nothing but a charred and smoldering investigation scene. Body bags litter the perimeter as Frank watches from a distance. He’s not alone though. He’s managed to collect those “three assholes” from a couple of issues back, Konstantin Pronchenko’s sons. Frank’s orders of “dig” are met with, Ummm, resistance. So Frank unloads a bullet in his forehead. The character isn’t named “the Forgiver”, is he. The other two get the message and dig. It doesn’t matter, they don’t last much longer. As I said, don’t talk back to Frank.

We briefly cut back to Frank and Zinaida’s last conversation, and fill in a few more blanks for the readers. Sex scandals, national defense secrets, powerful senators, campaign blood-money, this one’s got it all! Now that his fallen comrade has been laid to rest and those three shit-talking idiots are capped, Frank sets out to finish the job. Ennis doesn’t even bother patronizing us with how Frank slips past the guards and into the senator’s mansion. He’s the Punisher; that’s how. After the typical “WHO ARE YOU? HOW’D YOU GET IN HERE? WHAT DO YOU WANT” back and forth, Frank “cuts” through (heh) the squabbles by jamming a knife into the table and ordering Pronchenko to, oh, just SKIN THE SENATOR ALIVE! He’s not joking, either.

The panels and story flow wonderfully, between Ennis’ clever narrative (“after that, there’s a lot of what you’d expect”) and the masterful art and coloring. I won’t speak much on the skinning panels, as they speak for themselves. We wrap up our story with Frank dressed as a civilian and recounting the final events. Pronchenko gets carted off to an insane asylum after a “successful” plea of insanity. The way Frank tells it, Pronchenko might have preferred the death penalty. The final scene is our anti-hero at a bar, a rarity, chugging down a single shot of Vodka in Valery’s memory. Just one.

As far as the art – we’re going six for six with this one. I don’t know how else to say it other than each issue has been consistent in its’ excellence. The art is exactly what it needs to be. The muzzle flashes are vibrant and explosive, brains and blood explode out of skulls with the best of them, and Frank is as imposing as ever. We’re even treated to some down-right pretty nightscape views from the senator’s home on the water. Facial expressions are filled with emotion… mostly terror. Frank’s stubble and iron chin alone would get you to at least a 5 on a 1-10 scale of badassery. I found myself torn during the ‘skinning’; half wanting to see the gruesome detail of the body, half hoping they’d leave it out. The bloodied and traumatized image of Pronchenko sitting in wrinkled ribbons of skin, blood, and vomit rivals the best of horror comics.

If you’ve typically stuck to the more mainstream of Marvel’s pages – Spidey, the X-Men, Cap or Hulk – I urge you to give this series a chance. This will be a fantastic trade when it’s collected, so if you’ve never strolled down the lanes of a MAX series, I’m confident that this story will not let you down. The only caveat is that you know what you’re signing on for. Don’t give this as a gift to your 13-year-old cousin. This is for adults. It will make you think, make you pump your fists, and at times make you recoil at the brutality the human race can sometimes inflict on ourselves. The language, violence, gore and subject matter aren’t dialed up just for the sake of it. The beats are emotional and visceral. But that’s what we come to the Punisher and the MAX series for. Most importantly, this series is Frank Castle through and through. In all seriousness, this reviewer highly recommends this series for the right audience. Whew… that was pretty heavy. Ending on a lighter note: Initially, my score for this issue was going to be a nine out of ten. High praise, and well-deserved. This was a grueling yet thoughtfully balanced close to what has been a great series. Then it dawned on me… no guyliner for Frank in this issue!? Well, let’s bump it up to a 9.1 then! (insert completely unprofessional and not Frank Castle in any single way winky emoji here) Now if you’ll excuse me, I’m going to close the laptop and enjoy a shot of vodka in salute to this series.