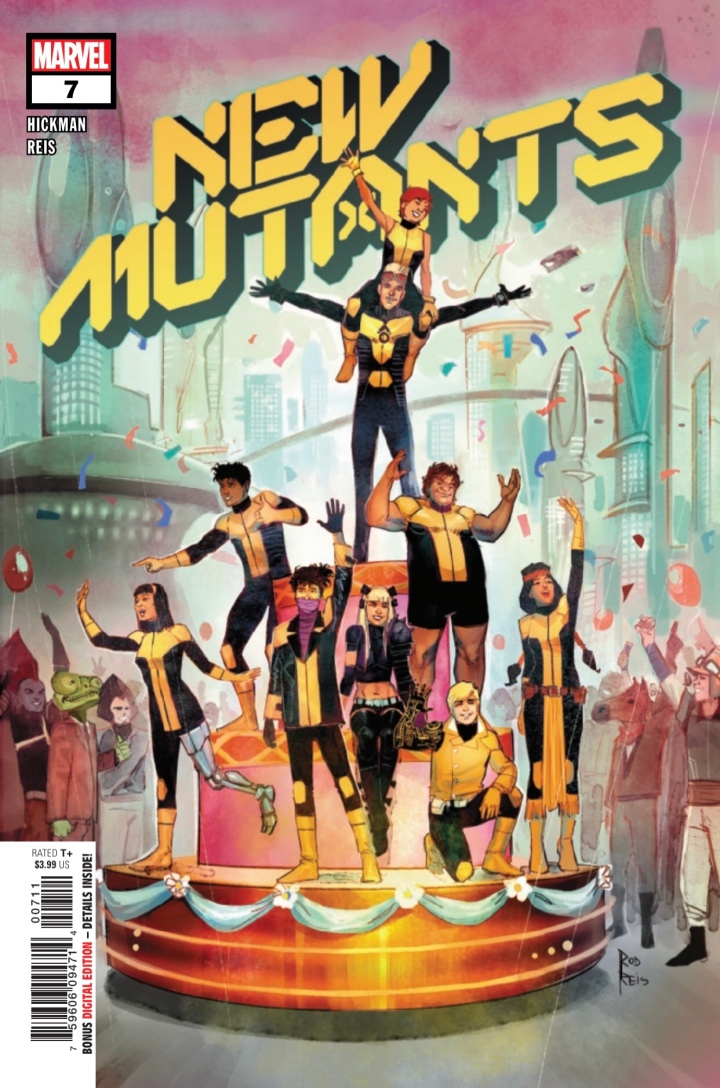 We’re back with the NEW MUTANTS in space, and that is quite literally where this story left off! Who, if any, survived the Death Commando attack? Will the survivors be able fend off the remaining Commandos? Let’s find out in Jonathan Hickman’s NEW MUTANTS #7!

Yes, *SPOILERS*, which is the title of this issue and also what Roberto Da Costa proceeds to do in the opening pages during one of his patented recaps. Bobby describes how Magik rescued the mutants floating in space from the Death Commando attack, how those orbed over to the attacking ship were captured, tortured, and ultimately rescued by Deathbird, and how the NEW MUTANTS commandeered the vessel and headed off to Chandilar. At this moment Dani interrupts, telling him he’s spoiling the current issue. A confused Roberto points out the discrepancy in the numbering, to which Mirage replies that there’s another team on Earth every other issue. It’s Jonathan Hickman letting loose and having fun, and that’s what his half of NEW MUTANTS is all about. And it totally fits in a series that after all gave the world Deadpool. 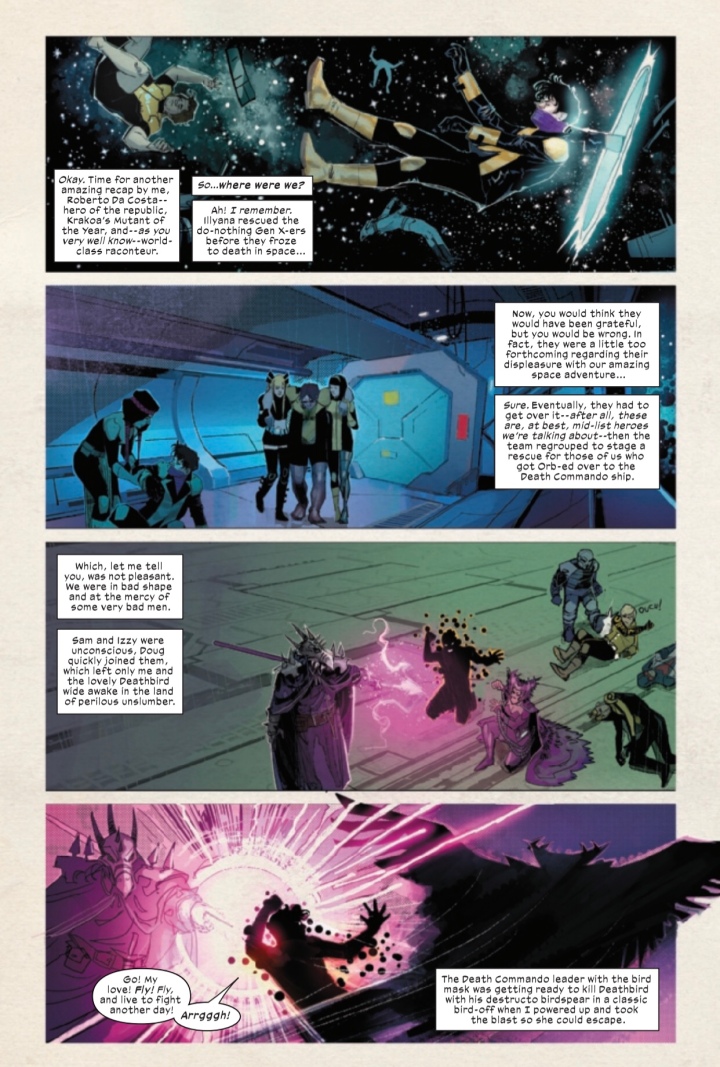 Doug and Karma interrogate one of the Commandos, a gaseous entity named Sega, who spills the beans about the trap waiting for the team and Deathbird on Chandilar, but only after being threatened with being turned into a solid. The team arrives ready for action, and after some posturing we get a fight between the NEW MUTANTS and the Guardians. Honestly, the story and reasoning and the politics are pretty secondary. The book excels when Hickman goes for humor and fun, and he even uses one of his X-Position pages to great effect here, mapping out a D&D-esque dice game to determine who wins the fight. It’s goofy goodness and another example of how his half of NEW MUTANTS is the most fun of the X-books. 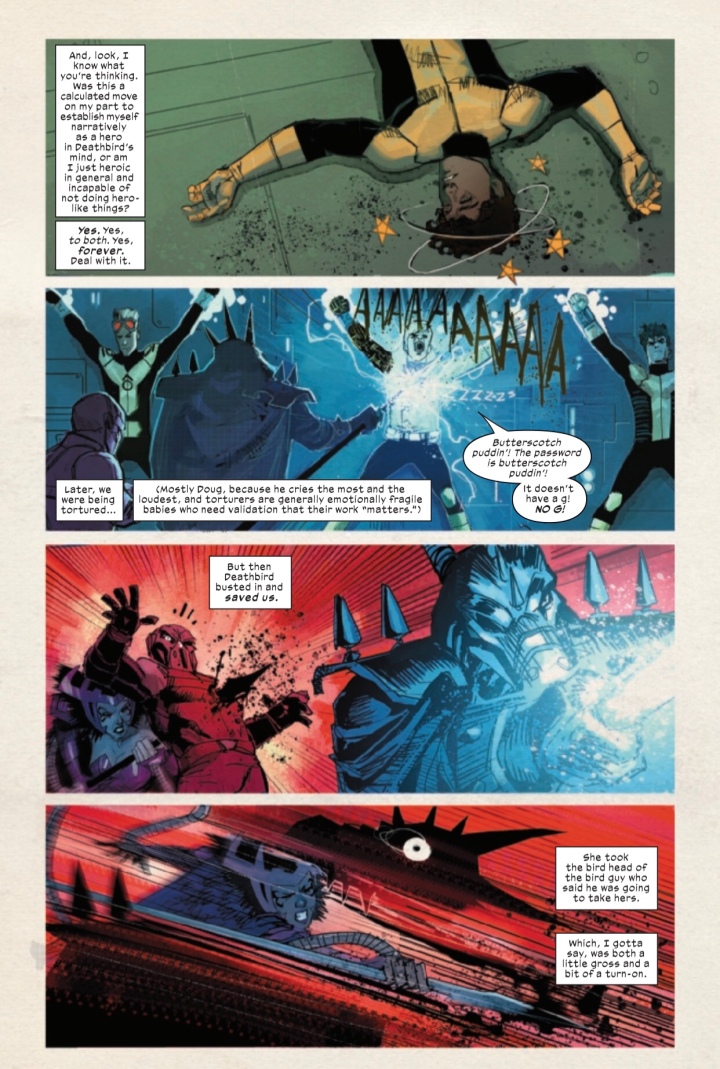 Xandra breaks up the battle before anyone gets Yahtzee, and comes up with a peaceful, albeit contrived, solution to the cause of the fighting. After that it’s time to party, and the book closes with some friendly banter between Bobby and Sam. It’s not a great ending, but this mini-arc was more about the journey than the destination. If there’s one complaint, it’s that Hickman probably brought too many characters to the table; a lot of the NEW MUTANTS got lost in the shuffle. On the other hand it was fun to see Rod Reis’ take on the multitude of mutants. 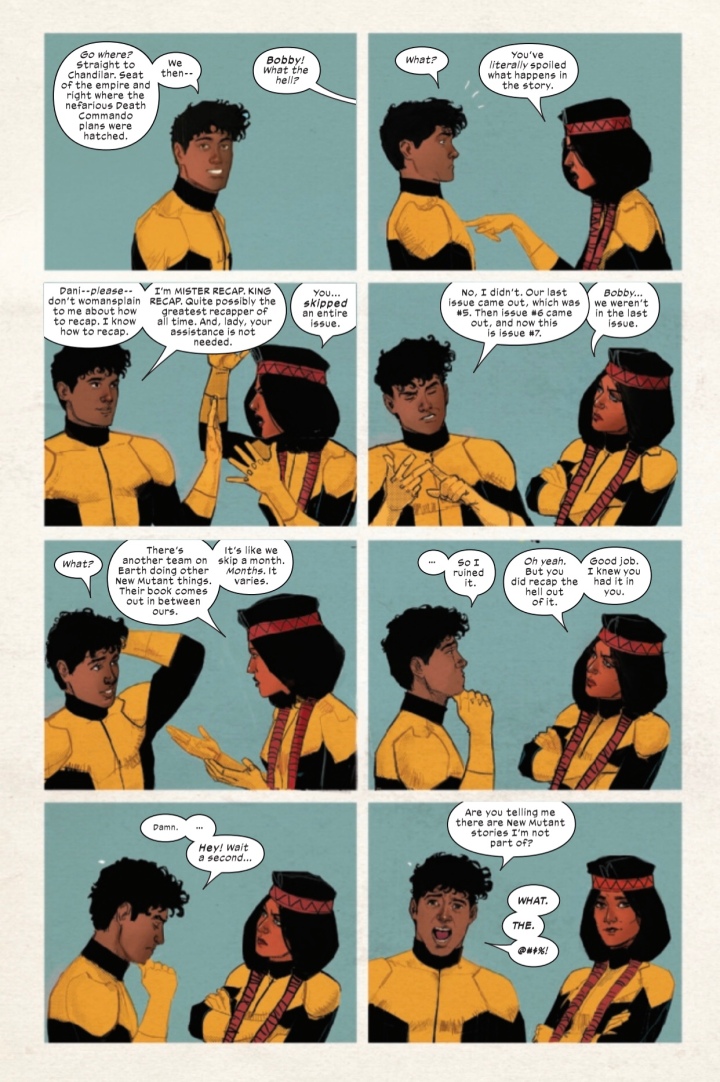 NEW MUTANTS #7 was another fun entry into the Jonathan Hickman side of the series. Just when the story begins to loll Hickman injects some humor, often at the expense of comics tropes, to lighten the mood. It’s a shame we can’t get this team for every issue, but it’s worth checking out when we do.