It’s the final showdown with cyber god Apoth. Can Psylocke overcome her personal demons in order to defeat him? Will her ragtag team be up to the challenge? Let’s check out Bryan Hill’s FALLEN ANGELS #6 and find out!

The book opens with more of the confusing, self-doubting inner dialogue we’ve come to expect from Bryan Hill’s Psylocke. To say it’s irritating at this point would be putting it mildly. Maybe Hill wants readers to root for the bad guy? We get it— Psylocke is damaged. Can we just have some fun for a change? To quote cinematic masterpiece Stripes, “Lighten up, Francis.”

Next we’re thrust into the battle on the ground, and the confusion doesn’t get any better thanks to Szymon Kudranski’s art, which just isn’t made for action sequences. The team battles people hopped up on the Overclock drug while what appears to be a fire blazes around and at times through them. Even Kudranski’s facial work, his strong suit, is at times downright atrocious. 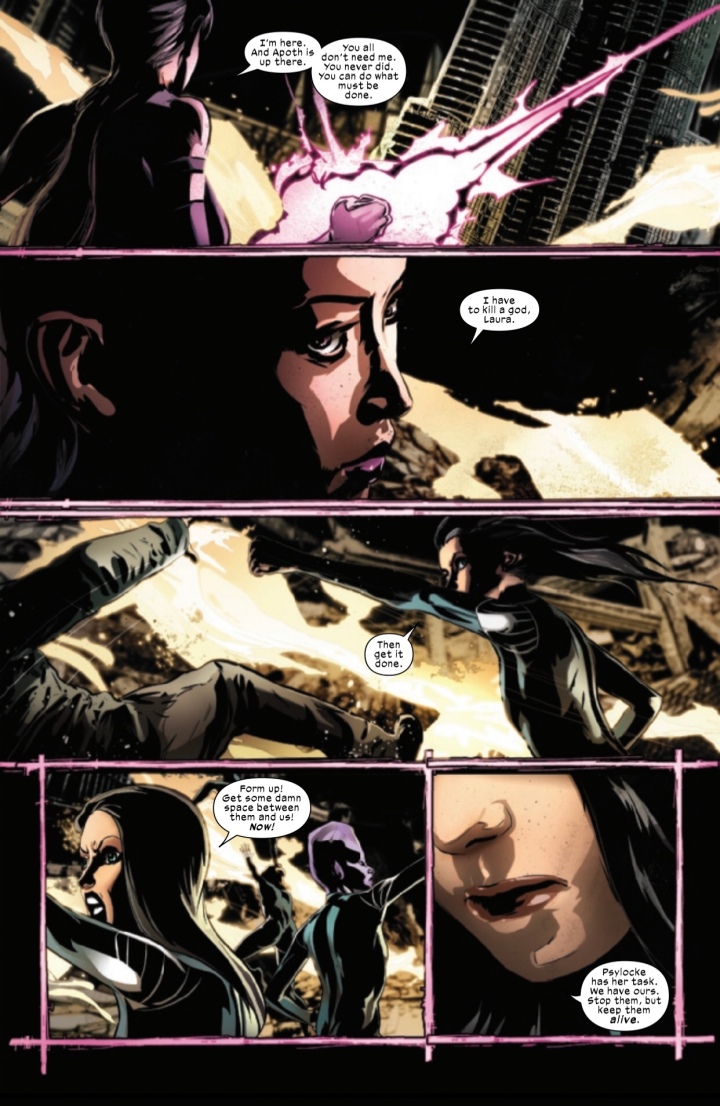 While the team continues to try to contain the druggies without harming them, Psylocke sprouts some butterfly wings and flies to the top of a building to fight Apoth. The full-page spread of her launching upwards is admittedly pretty badass, and the best piece of art in the issue. Psy enters the Matrix to battle Apoth on his own turf, and Apoth tries to use Psylocke’s regrets against her. She wins the battle by stabbing an image of her daughter, then gets a visit from the Silver Surfer, er, the good half of Apoth. Who was there all along and sent Psylocke to do his dirty work. Yeesh.

Back on Krakoa, Psy has a little heart-to-heart with Laura, then visits Sinister and gives him a piece of Overclock tech that has Apoth trapped inside. Hill’s Sinister feels, well, sinister, and a vast improvement over what Jonathan Hickman gave readers in HOX/POX. It’s a shame Hill didn’t have more for Sinister to do, because he’s the best written character. The book (and it looks like mercifully the series) ends nicely with Psylocke admitting to herself that she did a good thing, and is capable of doing more.

But no, the moment has to be ruined by a Hickman X-position page— this time an excerpt from a 15th century Japanese play. Seppuku may cross readers’ minds at this point, but just keep telling yourself, “FALLEN ANGELS is over; FALLEN ANGELS is over.”

FALLEN ANGELS #6 is a disappointing ending to a disappointing series. Neither the team nor the villain ever felt fleshed out. Psylocke moped her way through the entire series, but did emerge triumphant and gain a degree of closure on her past, so that’s something. Whatever the future holds for the characters in FALLEN ANGELS, it is hopefully better than what we got here.