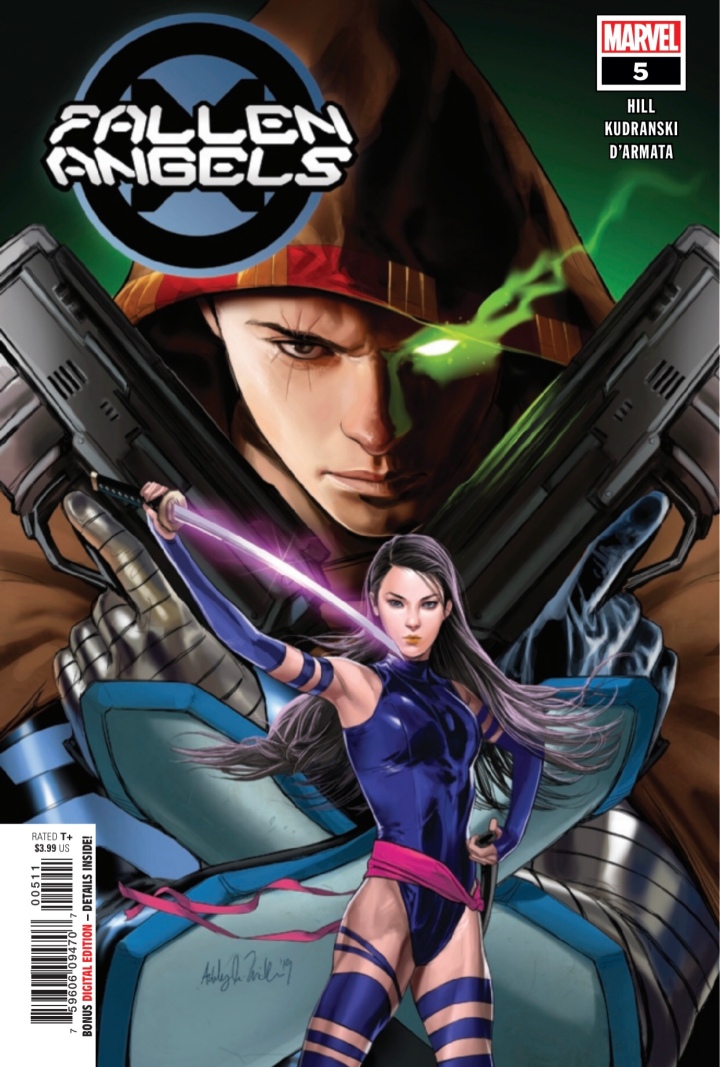 The showdown with Apoth draw near. As X-23 recruits a team, Psylocke must become the teacher and leader they need. But will she be able to overcome the deadly lessons she herself received as a child, or unwittingly pass them on to the young mutants under her care? Let’s find out in Bryan Hill’s FALLEN ANGELS #5!

The issue opens with Laura recruiting a bunch of A-list mutants to go kick some cybernetic ass! Okay, not really. She gets Cable (who’s really already part of the team), Husk, and Bling!. In all fairness, it’s probably hard to get a bunch of mutants partying to go fight for the humans that have ostracized them countless times. So this is our team moving forward. 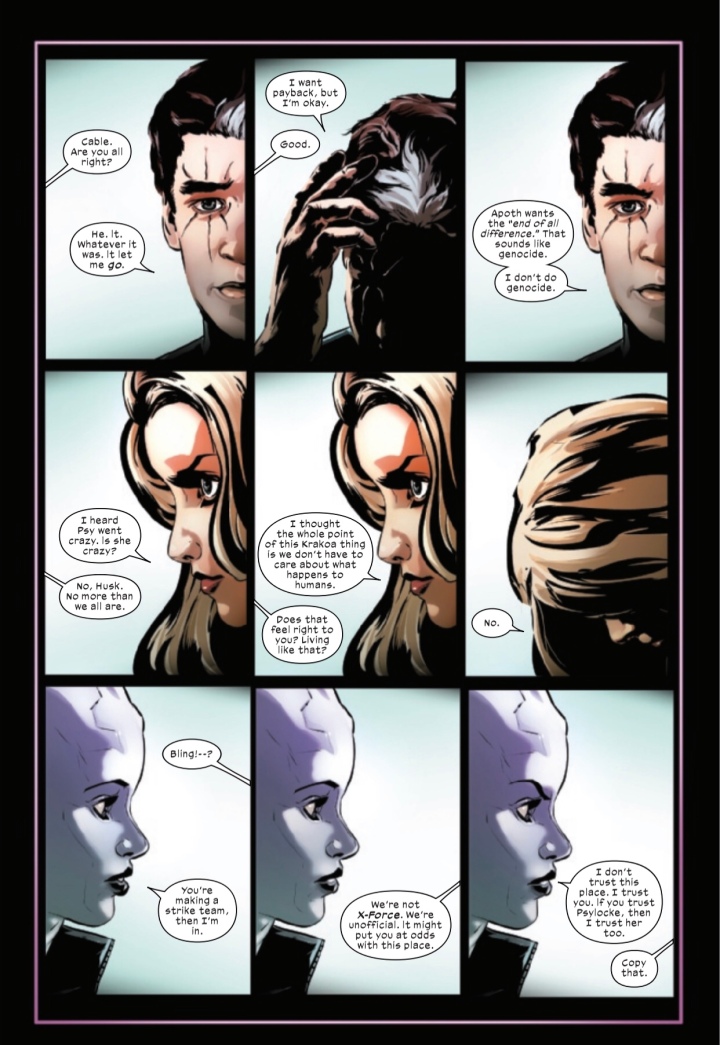 X-23 reports to a meditating Psylocke that the hit squad has been assembled, and we get the patented Szymon Kudranski flowery panel art and Wayne’s World extreme close-ups. Maybe if Kudranski would cut the unnecessary, albeit pretty, panel decoration, he would have more time to do full figure and background work. Although he does excel with faces, and his figures aren’t great at times, so perhaps he’s just going with what works best for him. It all does feel a little soap opera-ish at times however.

After Psylocke’s first mini existential rumination of the book (a Dishwalla “Tell me all your thoughts on God” discussion with Laura), she goes to see Mister Sinister for help on finding Apoth. Sinister attaches one of the cyber drug delivery devices he’s tinkered with to Psy’s dome and sends her to the Matrix, in some of the best visuals of the issue. There she finds out Apoth’s base of operations is Dubai.

Having sussed out the big bad’s locale, off we go to another Japan flashback and two pages of text. It’s actually some of Bryan Hill’s strongest writing, and the flashback ties in nicely with the speech Psylocke gives to her team in the following pages. The two text pages, a hallmark (decree?) of Jonathan Hickman’s overseeing of the X books, just bring the momentum to a screeching halt. Sometimes these pages work, but here they would have been better served as an epilogue, or dropped completely.

Existential crisis #2 follows, with the tedious storyline of Psylocke/Betsy Braddock. Don’t care/should have been hashed out in one issue. Next we get some page padding via training, before a nice pregame pep talk by Psylocke is ruined by a forced “angels” reference from Husk. Well, maybe it’s her; the Kudranski Close Up is in full effect at this point so it’s hard to tell. Either way, it’s more forced than a James Bond title drop. Finally, there’s a nice send off from a Krakoan head honcho as the team heads to Dubai to face Apoth.

FALLEN ANGELS #5 is a typical setup issue. A team is assembled. Training and preparations ensue. The final boss battle location is discovered. This is all well and good. However, the fact that 2/5 of the team are introduced here (and aren’t popular characters to begin with), and added to that the lack of a defined villain, make the arc feel like it is sputtering to its conclusion.