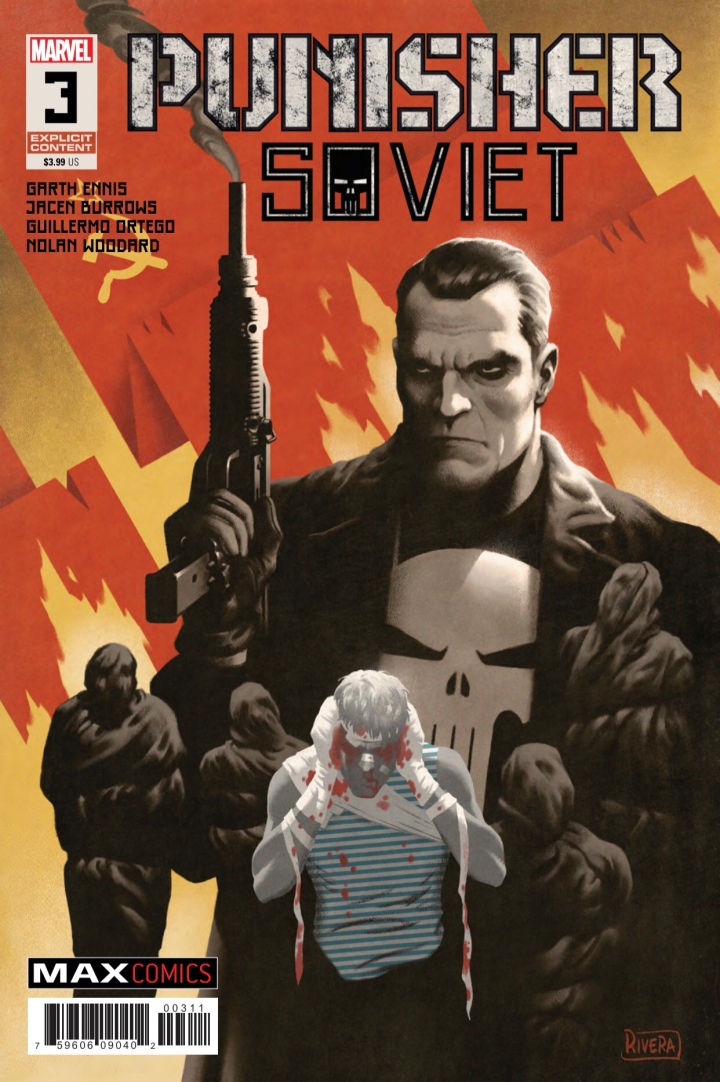 Has Frank found a kindred spirit? This issue brings us the background story for Frank’s new… is ally the right word? While we can’t answer those questions for sure yet, if you’re looking for an action-packed read that might even make you think, Garth Ennis’ third chapter in “Punisher: Soviet” will not leave you disappointed! But let’s just reiterate in case we’ve forgotten, this series is NOT for the kiddies!

Wow does this one open up grisly! Ennis quickly pulls you into the issue. When soldiers are forced to pass by their chopped up comrades (who are begging to be put out of their misery) it’s easy to imagine yourself in their rock and a hard place situation. Common human decency dictates that you not just leave your fallen brethren behind, however, with a commanding officer barking that you do exactly that… what would you do?

Let’s mix things up and start with the art. The color pallets and use of shifting tones to match what’s taking place in the story are very well done. There is a sort of sepia-faded look to indicate flashbacks, a red-ish, more foreboding atmosphere when the action kicks into high gear, and starkly contrasting blue/black night time panels when we come back to real-time conversation with Frank and Valery. There are some nice explosions, plenty of bloody kill-shots, and even a good knife through the chest! Silhouetted figures are used sparingly, but very effectively, to give a momentary break from the non-stop chaos of battle. The creators do a good job of thrusting the reader into that chaos, and only rarely panning back to Frank and Valery in real-time. The art itself is detailed where it needs to be (especially the facial expressions), and plain enough with backgrounds and vehicles and such, as not to be distracting. 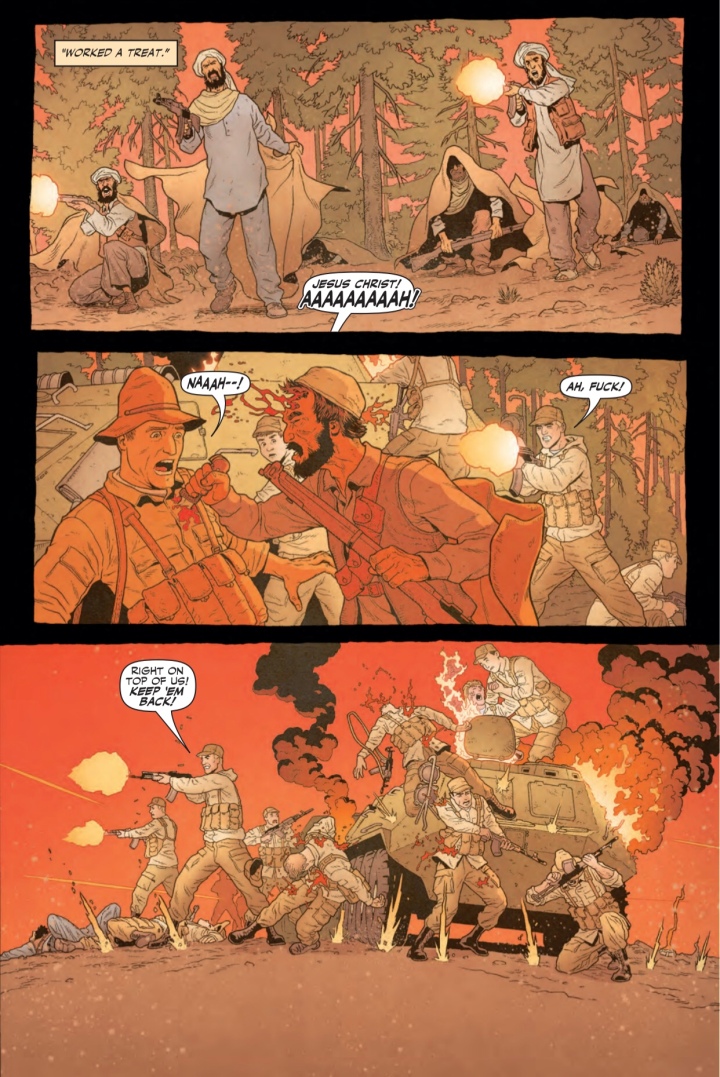 As far as the storyline goes, it’s fairly cut and dry. We see Valery and his platoon traversing a war-torn landscape, only to be ambushed. Nothing out of the ordinary here, however, the last page of this issue does throw some intrigue into the mix. But let’s not get ahead of ourselves. This review won’t spend a ton of ink on the story itself, mainly because it’s not the story, but the art and a few well placed “holy shit!?” moments that really leave you wide-eyed. Surrounded with no backup plan or escape route, Valery finds himself increasingly alone and on the brink of being overrun as his troops are picked off one by one. There are some very visceral panels, like the suicide grenadier taking as many enemies with him as possible, or when Valery gets, ahem, “secured” to the tree once he’s taken, prisoner. The book mentions a few times that “that wasn’t even the worst thing that happened that day”. If you still haven’t read yet and don’t want the, umm, surprise?? ruined, then skip the rest of this paragraph. Otherwise, open your eyes with me and Valery to find your friends SKINNED ALIVE and moaning in indescribable agony, while you can only look on helplessly with your own hands staked to a tree. Like I said earlier: GRISLY! And since this reviewer learned a lot of vocabulary from X-Men comics in his youth, the loose definition of grisly is ‘disgusting and bloody, absolutely repulsive and horrible’. Seems accurate to me. Who says comics can’t be learning material!?

After being released in the classic ‘leave one guy alive to tell the tale’, Valery is rescued and treated medically. Although it was a little uncertain where the last page or so fits into the timeline of this issue, we find Valery at a bar drinking away his sorrow. Is it the same night as his reminiscing with Frank? A day later, a month? We don’t know, not that it’s crucial, but it would have been nice to have some timeline context. OH!!! Of course, one more thing… while reading a newspaper article about what happened to Valery and his men, his drinking buddy JUST SO HAPPENS to know who the guy in the photo is, AND that he was the one that sold them out and set up the ambush. I think I have an idea who Frank and Valery will be targeting next issue!!! 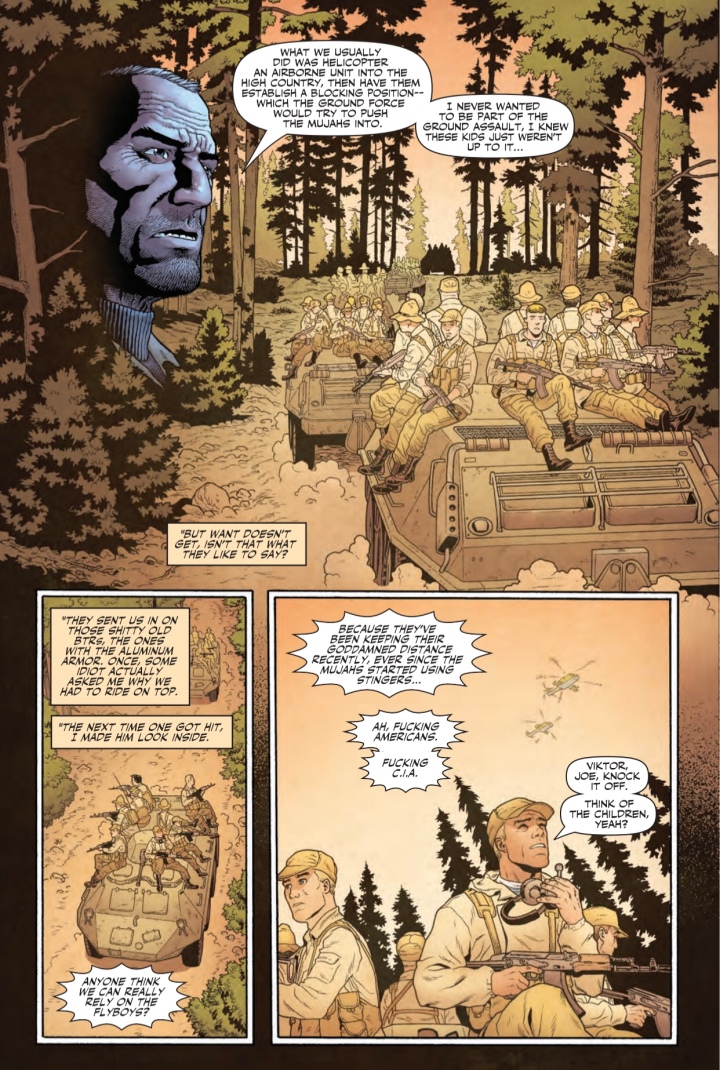 As far as story set-ups go, this issue is pretty standard; a few flashbacks to flesh out Frank’s new battle-buddy. However, the art and pacing are great, and the action and gruesomeness are enough to overcome what could have been a very paint-by-numbers issue. Plus, we get set-up going forward as Valery now has a face to take his revenge on. Overall, in a Punisher comic where the Punisher literally only has one speaking line, this was a well-done issue that reads nicely and throws in a few gasps while helping us get to better know this new character.