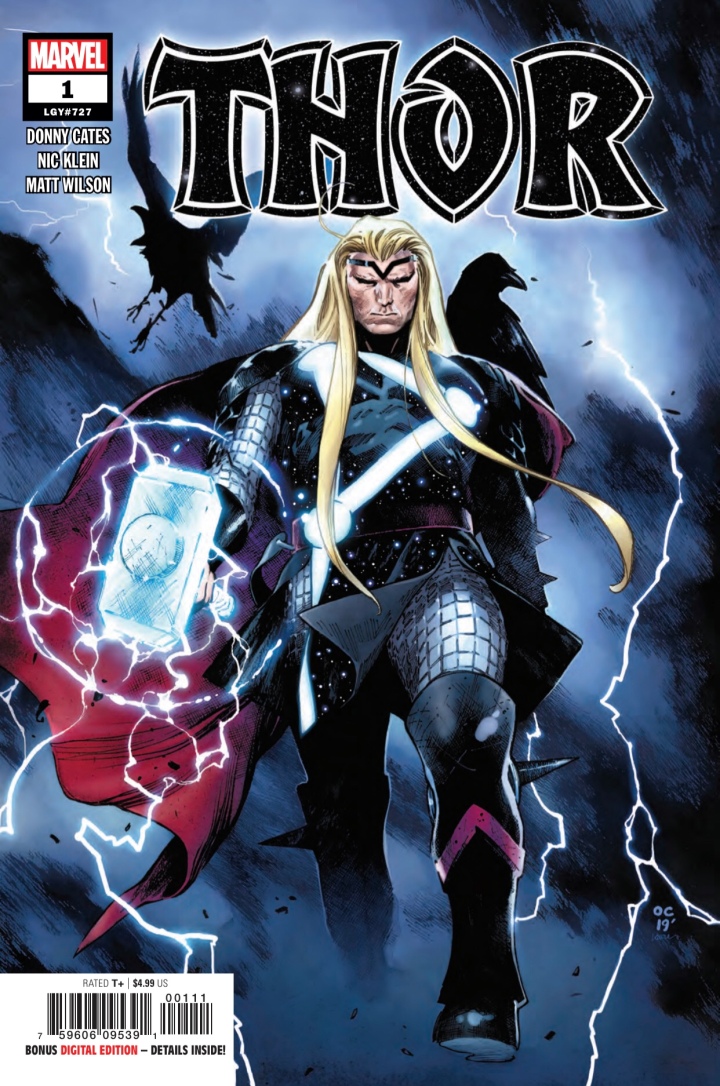 The prince is now a king and all of Asgard lies before Thor, the God of Thunder in this inaugural issue of Donny Cates’ THOR #1. And after many months of war, the Ten Realms are finally at peace. But the skies above the Realm Eternal are never evident for long. The Black Winter is coming and the All-God of the Storm will be powerless before it without a little assistance from his comrades. Let’s soar into this baptismal issue of THOR #1 and see what new magical direction Cates has in-store!

How do you follow up a seven-year run of a character that had some of the best writing, some of the most creative stories you’ve seen by the character, and doing so with some of the most talented artists the world of comics has ever seen? Well, you bring in a creative wizard-like Donny Cates and sprinkle in a brand new unique artistic style from Nic Klein and stir it up nice to see if the watermelon gazpacho tastes just right! And fans, coming from someone who had read every THOR issue from Jason Aaron to date, this critic is well astute in recent Thor lore. My point is: Cates uses this opening issue to quickly leap out of the gate and place our retired All-Father in a brand new direction that has never been seen before.

Cates makes HIS Thor brand new in direction, purpose, and appearance as well. Odinson gets a new look from Nic Klein, even down to the throne room, making the All-Father of Thunder appear more like the older, more Scandinavian Norse God’s from ancient mythology. Klein’s art seems incredibly earthy and rugged yet still so realistic, bawdy, and robust. Klein’s facial expressions of the characters invoke true feeling and expression, which many artists sometimes skim over, while his prime example comes in the form of Loki as he oozes distant for his brother.

Now, as amazing as the art may be, the shock of the huge cosmic guest stars of Cates’ opening tale should come as no surprise. Many could easily guess who these stars would be, especially with this being a Donny Cates narrative. He does rather enjoy connecting his OWN comics within his OWN stories creating a little bit of a Cates-Universe. That said, the cast of characters in this opening tale seems a bit too egocentric. Maybe Marvel is pushing Cates to use these characters OR maybe it’s by his choice? Who knows? However, a few of this cast is becoming a bit overdone. Furthermore, if this reviewer happens across another series relating to Knull, I think I may lose my $&@&!

Similarly, as someone who reads many (and I mean many) comics, the other aspect of this issue that may appear new to some has actually recently been done by Mark Waid in a different comic, but with a twist. That said, the issue is still fun, exciting, fast-paced, and takes Thor in a new direction that he hasn’t seen before. Plus, by the end of the issue, Thor’s new look and direction begin to make more sense and this reviewer kind of likes it.

Lastly, the biggest problem with this narrative actually has nothing to do with Cates or Klein. It’s the idea of adding weight to a story by means of anything “world ending”. Readers just saw Jason Aaron’s THOR end in the far future with a victorious All-Father to end all time becoming the very Thunder and Lightning himself. My point: the world isn’t going to end now in any story by Cates and thus its significance is handcuffed unless the brilliant writer finds a way to strategically alter Thor’s destiny. Well, we shall see what this Black Winter will bring now, won’t we!

New readers to Cates will immediately see his outstanding imagination, his well-written dialogue, his easy to follow storytelling and his overly complex stories that he breaks down into easily digestible and vivid chunks that draw comic fans deeper into the narrative. THOR #1 showcases everything that has made Donny Cates one of the best writers at Marvel for many years now. This critic feels that Thor fans, as well as Cates fans, will leave this first issue pleased with the new and exciting direction the All-Father of Thunder is heading. If you’re a new comic fan or new to Thor, this is a great issue to jump in and grab a taste of that delicious watermelon gazpacho. Don’t be nervous if you skipped out on WAR OR THE REALMS. You’ll be able to follow along with ease. Now is your chance to get into one of the best characters ever created. Pick this issue up and add it to your pull list. You won’t be disappointed.