It’s a bit weird seeing a character who first appeared in an issue of Transformers UK back in 1987 getting his own mini-series in 2019. It hasn’t all been smooth sailing for the robot bounty hunter Death’s Head in his publishing career. His initial popularity with Marvel UK readers earned him guest appearances in US comics like Fantastic Four and She-Hulk, but his publishing history is as much marked by near-misses and failures as it is by successes. Will this mini-series see him return to his former glory? There’s only one way to find out…

Well, if the cover’s anything to go by, I’d say we’re off to a great start. The eponymous robot glowering down at a riotous mob of heavy metal fans, while brandishing his guitar in a way which suggests that he not only knows how to play it but is quite prepared to use it in a more offensive manner, is a fantastic image. The comic opens with Death’s Head in a bad way. Rebooting his memory, he learns that, having had a run-in with his former employer Yondu, he’s been dropped into an inter-galactic garbage chute which has dumped him on Earth; at some point in the last 13 weeks he’s been turned into an amp for a heavy metal band. Perhaps understandably, he’s not best pleased by this series of revelations.

Unfortunately, Death’s Head ‘wakes up’ in the middle of a gig. Needless to say, the resulting scene isn’t pretty – at least until Wiccan and Hulkling show up to (sort of) save the day. The creative team does a very good job here of demonstrating just how tough and relentless Death’s Head is. In some respects, the battle between him and the two Young Avengers is a great introduction to the character. There’s typical grim humor on display in the dialogue, but Hulkling is down and Wiccan’s under real pressure before his teleportation spell takes effect and whisks Death’s Head away. (To the pair’s apartment, which we’ll get to in a moment.) 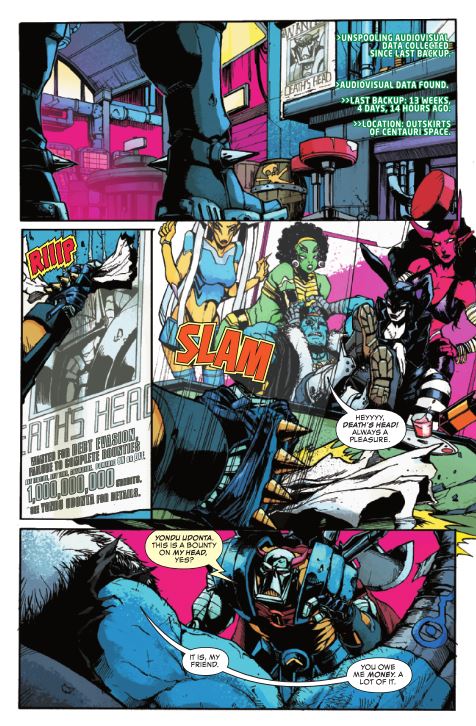 Arguably, there’s a bit too much throwing out of background information going on in this section. Is it reasonable that Wiccan knows quite so much about Death’s Head? If he does, is it reasonable that he’d blurt it out to himself while fighting him? Kei Zama’s art is nice and dynamic here, though. This fight scene is easy to follow, and its final page is really very bold and dramatic. Just my kind of thing, to be honest. 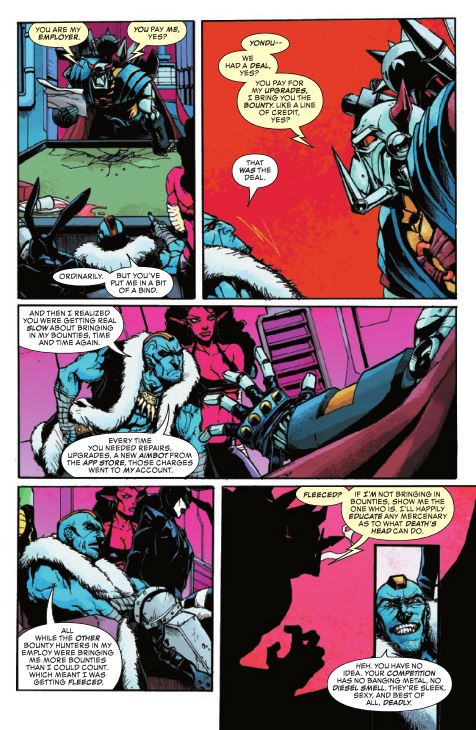 Our Young Avengers pair retreat to their apartment where Wiccan assures Hulkling, Death’s Head is inert, having run out of power. I don’t particularly want to spoil the rest of the issue, but I will say that Howard’s grip on the characters is firm and it’s clear that she’s having a lot of fun with this bizarre match-up. This is no clearer than in the issue’s ending which managed both to be dramatic and give any reader of this issue a compelling reason to pick up the next one.

Howard does a great job of introducing the titular character to a new audience and ensnaring a decidedly hapless Hulkling and Wiccan into a story that promises to get even stranger. Zama’s art is bold and mostly impressive, and the issue ends with the kind of revelation that throws open all sorts of possibilities for this series. All in all, this is a very engaging, cleverly-written start to the series. Recommended.