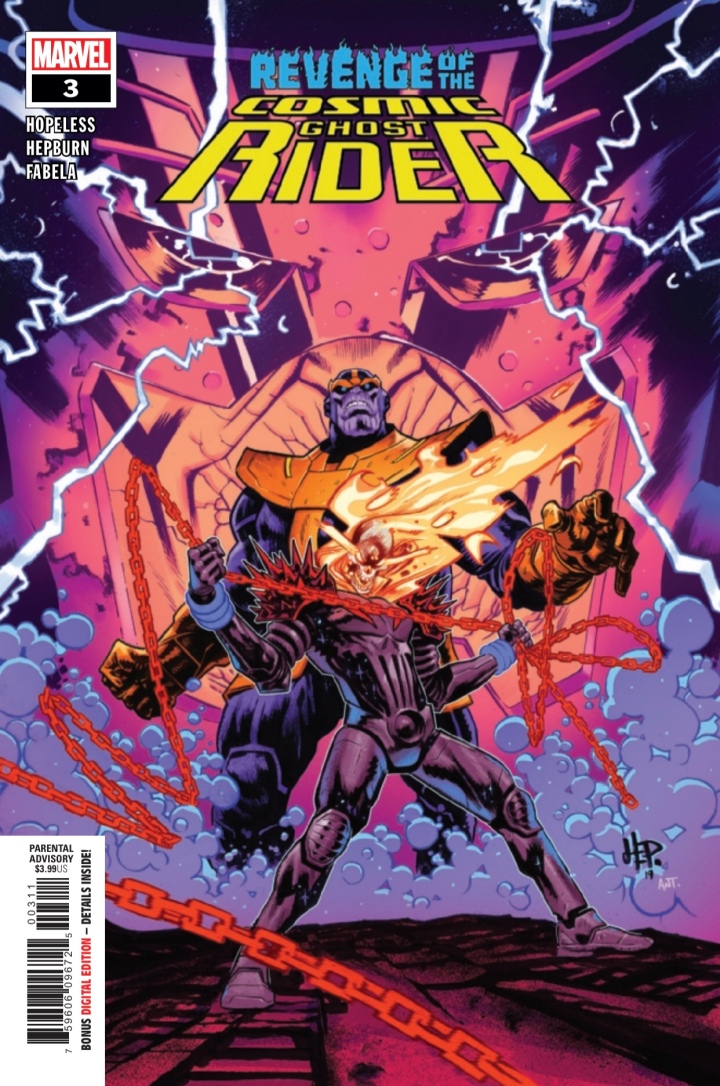 It’s Frank vs the Cosmic King! Who will emerge victorious? Will Frank save Cammi from the black hole? What will the King do with Frank’s soul? Let’s unchain Dennis Hallum’s REVENGE OF THE COSMIC GHOST RIDER #3 and find out!

The issue opens with the gut-wrenching scene of Frank’s family being killed before his eyes in the first of the book’s several flashbacks. Dennis Hallum gives us the best inner dialogue of the short series here, and ties all the flashbacks neatly to what is going on in the present fight with the Cosmic King. Scott Hepburn’s art too ties the past and present together seamlessly, as turning to the next page presents a striking image of Cammi reaching out to Frank, mirroring the image of his dying daughter from page one. It’s hard to imagine a better two-page opening, and gives some weight to what has otherwise been an overall fun romp of a story. 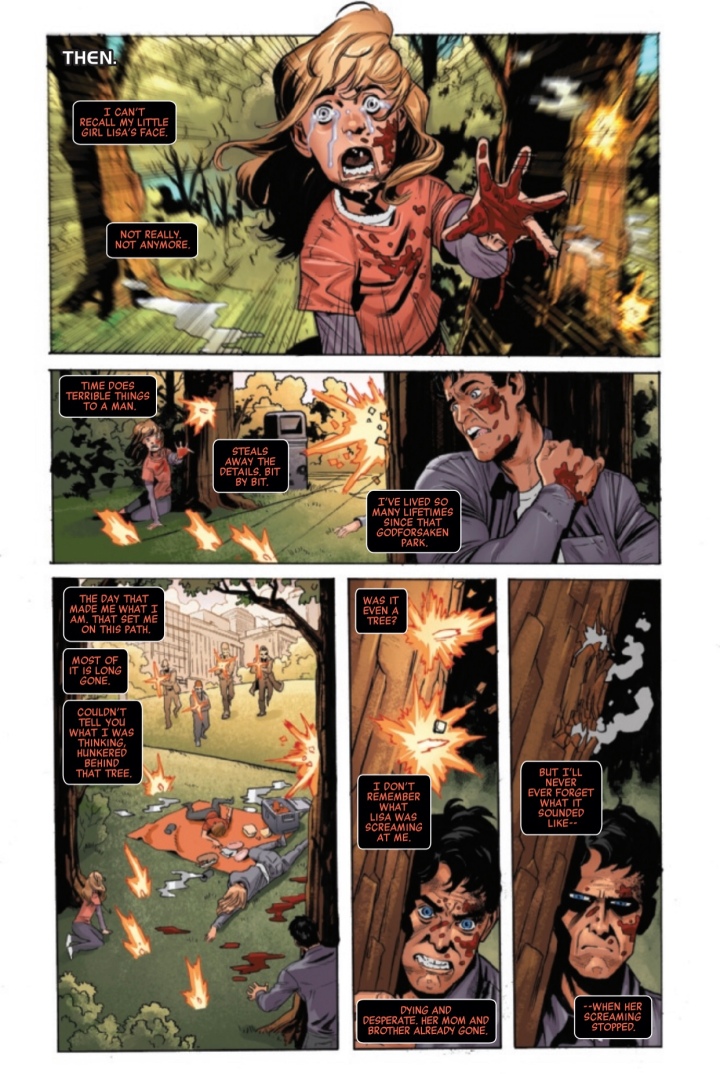 Frank is unable to save Cammi (at least for now one would think) and commences to fight the Cosmic King, which pretty much lasts the rest of the issue. The interspersed flashbacks keep it from getting monotonous, but some of the progressions are a little wonky. The two eventually crash into a planet with the force of an atomic blast, and Scott Hepburn’s depiction of the citizens getting blown away is both beautiful and chilling. Once again Antonio Fabela’s colors have to be mentioned; this is just a gorgeous book to page through. 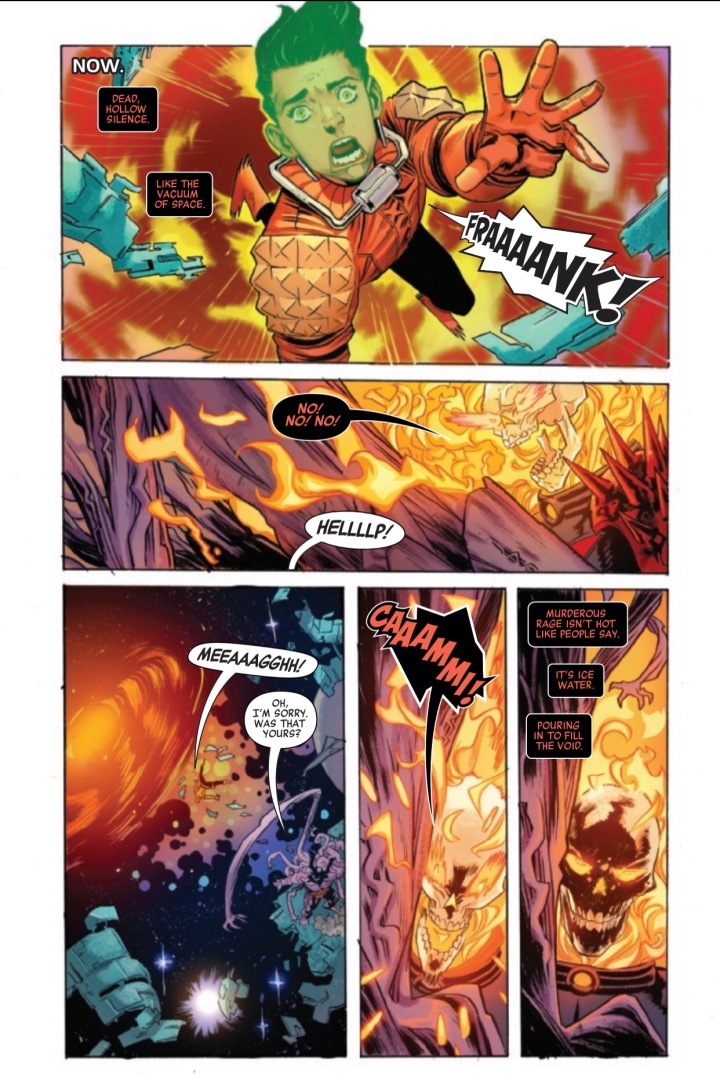 After a flashback of Frank in Hell with a somewhat over-the-top Mephisto granting him the powers of the Spirit of Vengeance, it’s back to the battle at hand. The Crimson King tries to guilt-trip Frank over all the innocent lives he couldn’t save, and the millions the two of them just killed by smashing into the planet. Frank, ever the badass, throws it back in his face, asking if the King really thought “that a little death was gonna scare me.” Damn; that is ice cold. 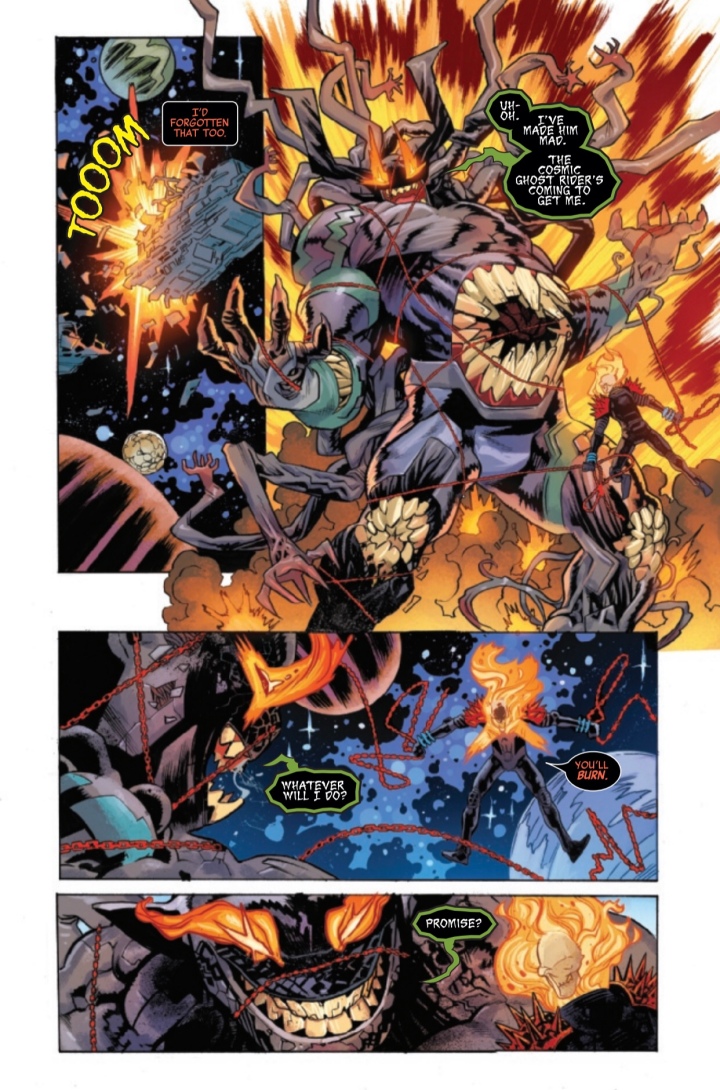 Next is a string of flashbacks showing Frank’s time as a soldier, as the Punisher, and as the Ghost Rider, and all the lives he couldn’t save. It’s a crash-course in the character’s history that probably would have been better served in the first issue, but it still works in the confines of this story. The Crimson King reiterating it all as he pummels Frank is unnecessary however. Frank eventually gets the upper hand and forces the King’s wild card, and we’ll see what that leads to next issue.

REVENGE OF THE COSMIC GHOST RIDER #3 manages to expertly balance story and action. The scenes flow seamlessly between flashbacks and current goings-on thanks to both Dennis Hallum’s writing and Scott Hepburn’s art. Some of the fighting progression and monologuing could be tightened up, but issue #3 is still the best of the short series.