The Otherworld is rocked by war and it is a new era for mutantkind in this week’s all-new EXCALIBUR #1 by Tini Howard. Let’s dive into this brand new series as readers watch a new Captain Britain hold the amulet and fight for the Kingdom of Avalon with her Excalibur at her side!

Before this reviewer jumps into the issue, let me commence by clarifying my lack of knowledge of the EXCALIBUR franchise. This critic has read very little about the characters involved, it’s history, or it’s foundation to the X-Men in general. Therefore, my review is coming from the vantage point of someone enthusiastic, interested, and excited for the X-Men relaunch, adored the HOUSE OF X and POWERS OF X event, and has read and reviewed both X-MEN and MARAUDERS titles to date. If you’re a reader in my position that fits these criteria, this review is entirely up your alley. If you’re an experienced EXCALIBUR fan, then maybe you could shed some light on some of the missing elements that this analyst may be misinterpreting and misunderstanding.

So, X-fans and Excalibur fans alike, this critic vacated this issue thoroughly hazy and felt like Tini Howard tossed me into the deep end of the pool without my floaties. This critic is unfamiliar with Otherworld, unaccustomed with Captain Britain’s abilities, and Captain Britain’s connection to Betsy Braddock. Furthermore, Howard implies a recent fracture within Betsy’s family relationship with her brothers and there was no background explaining it to any new reader. This new reader had to piece together the issues on his own. Additionally, a Coven of Witches and Warlocks were introduced into the story without any guidance or direction. What is their purpose or connection within the story and who are they? On top of that plight, one of Betsy’s brothers was brought back to life. How did he die? Why is there relationship fractured? Again, what’s going on?!

As a new reader to EXCALIBUR, this issue left me with excessive amounts of questions, tons of confusion, unrest and little explanation. This comic was a terrible jumping on point for new readers who have very limited experience with Captain Britain, Excalibur, or this magical realm associated with the characters. Plus, the series felt like characters were positioned within the series for shock and awe. Why is Apocalypse … sorry “A”… in the story? What is his connection to the narrative? And, why the new name that readers (and characters in the story) don’t even know how to pronounce? Similarly, Rogue, Gambit, and Jubilee appear to be thrown into this series without a purpose, objective, motivation or connection to anything within the narrative. In order to connect plot threads, Howard appears to use aspects of Rogue’s abilities that don’t appear to make sense with this reviewer to move the story forward. Again, what’s going on?!

Overall, this issue was uneventful, dull, hard to follow, and had many moments where this critic was genuinely perplexed about which characters were talking, who they were, and their importance to the story. The plot really didn’t grab my attention and it sort of felt like the story was missing something significant and vital. The side character’s motivation and purpose didn’t seem well explained and the pacing came across very rough, scrambled, and didn’t set the rules for the main characters steering the story forward. The sinking feeling in this reviewer’s stomach was strictly that of dissatisfaction and confusion while hoping for something more dynamic for issue 2 to light this critic’s fire enticing me back into the series. 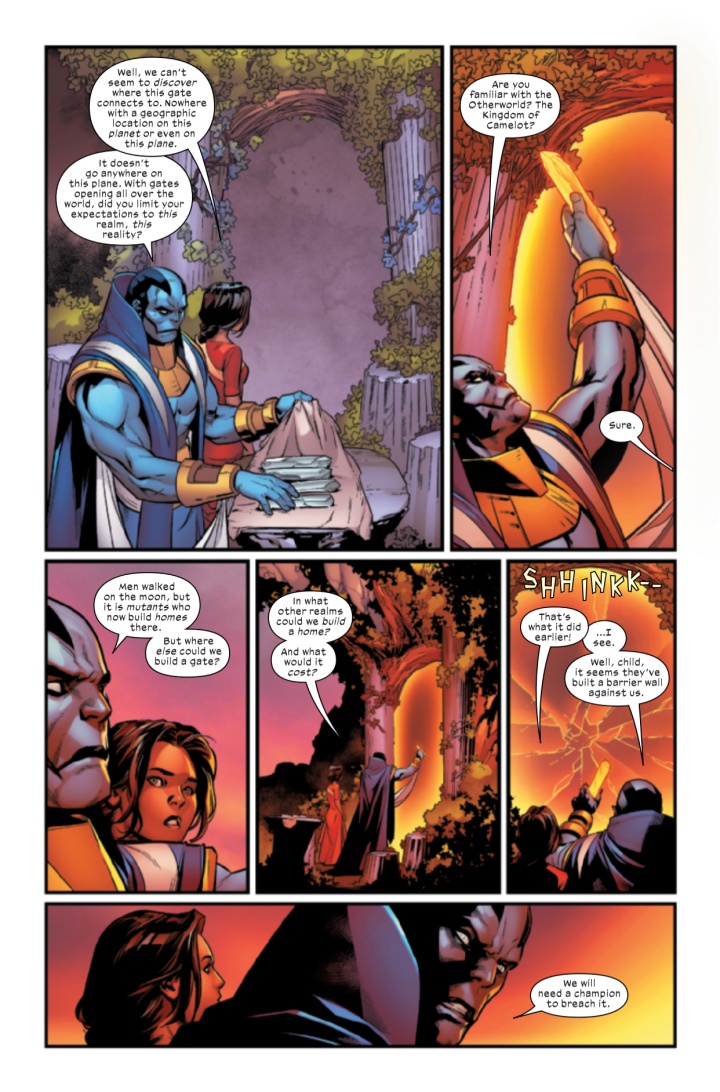 As the EXCALIBUR series unfolds, this reviewer found it difficult to uncover a purpose or direction throughout the inaugural narrative. The characters appear to be hurled into the issue without objectives, motivation, or direction causing a lack of any connective tissue to each other and the series. New readers will find this series extremely tough to navigate while experienced EXCALIBUR fans may still wonder why certain characters were placed in the series, to begin with. This comic was not a very exhilarating opening act and left this critic exhausted at times while also thoroughly bewildered. If you’re looking for an X-Book to dive into, this reviewer would not choose this one unless you are advanced in the area of Captain Britain, Otherworld, and Excalibur… and even then I have my doubts. There is a possibility that even those submerged with the Excalibur lore may still be disappointed with this inaugural issue.